July was a busy month on the work front, with not much time for anything else. In July I attended my first Aquafit class and really enjoyed it. Steve and I spent a damp day at Fairford for the air show and the month ended with a very last minute decision to attend Truck Festival – a good decision, as it turned out, as we had a great time and discovered the amazing Man Like Me. Dan’s annual presentation assembly made a proud mum of me, and we all celebrated my niece Abigail’s fifth birthday at her party.

Holiday!! Following a brief visit a couple of years ago we decided to spend a week in New Quay, Wales and despite the dreadful weather forecast we had a fab time. The weather was pretty good, with only one partially wet day and two or three very hot days. We enjoyed lazy days on the beach, evenings in the pub, a long and exhausting (but rewarding) walk round a waterfall, a boat trip to (not) see the dolphins and seals, an hour’s sea kayaking and an early morning walk along the cliffs (where we saw both seals and dolphins!) After the holiday I spent a day on an art journalling workshop, which was the start of a whole new hobby; the kids and I had a marvellous time at Thorpe Park, where Katie and I managed to get Dan on ALL the rides; I went up in a helicopter, thanks to the team at the Uffington White Horse Show; and we all went to cousin Jonny and Kirsty’s wedding party. We also watched plenty of Olympic action and revelled in Team GB’s brilliance!

September began with yet another unforgettable experience – a day at the Paralympics! Katie, Dan and I saw 7 aside football in the Riverside Arena, goalball in the Copperbox and ended the day with a memorable evening in the Olympic Stadium cheering on everyone, including Oscar Pistorius! It was a truly amazing day, made even more special by the volunteer Gamesmakers. I will never forget high fiving them all on the way back to the station at the end of a wonderful day! Other events this month included a family meal for for my dad’s 70th birthday; Katie, Mum and I went to Bath Thermae Spa for some relaxation the rooftop pool and did some pre-uni Ikea shopping; and I also took Katie and her friend to the Harry Potter Studios, which was another memorable day – we all cried when we turned a corner and found ourselves in Diagon Alley! Our final weekend as a family was spent in Oxford watching Alphabet Backwards – that was a good night. The month was tinged with sadness too as I drove Katie down to Brighton to begin a psychology degree at the University of Sussex – I’m immensely proud of her but the house is very quiet without her!

Fortunately I had a lot of work on in October, which took my mind off missing Katie a bit. She came home for a weekend, which was lovely but made me miss her more! On the home front we went to the rather disappointing Wantage Apple Festival, watched Torquay play Wycome Wanderers, Dan celebrated his birthday with a meal at Chiquitos and I went for a curry with an old friend. Dan spent a few days in Brighton visiting Katie, and Steve and I spent a day in London visiting the V&A and Science Museum and eating a delicious Argentinian steak dinner in South Kensington! We also went to our first (and only) British Touring Car event of the year, at Silverstone.

The highlight of November was a three day trip to Brighton mainly to start writing my first book (Living with a child with ADHD) but also to visit Katie. We had a good evening in the student union bar, ate at Fatboy Slim’s Japanese restaurant, drank coffee on the Bedouin seating in Naked and spent a happy couple of hours exploring the Laines. I also got over 12,000 words written! The rest of the month was pretty quiet, apart from my other niece’s 3rd birthday party, an auction, a couple of visits to a new Faringdon women’s group,  a blood doning session and the spoiling of my ballot paper at the first ever police commissioner elections.

And so to December. It started with another trip to Kent for a 40s themed 40th birthday party, which was a fun night, and a trip round Canterbury Cathedral, which was awe inspiring. I picked Katie up from Brighton for the holidays and did some Xmas shopping. There was a small but select meeting and Xmas lunch for a networking group I attend, a panto in Aylesbury and a rather raucous pub quiz night. Steve and I spent a very civilised Sunday drinking beer and watching Sightseers at the Phoenix Picture House in Oxford. And finally Xmas was spent with family both up here and in Devon, and was very enjoyable.

During the year I’ve kept a “trophy board” where all the evidence of my life is on display. it5’s been a fantastic way of looking abck on the months and realising that life is good. The photo below is my completed 2012 trophy board … impressive, huh! And if you want to know more about trophy boards you really need to read How to Do Everything and Be Happy by Peter Jones 🙂

And that’s about it for 2012! It’s been a busy, exciting year, full of changes and fun. What will 2013 hold? We’ve already got a couple of things booked – a painting workshop in January and a holiday in Cromer in the summer. We’ll have to see what else comes along …. 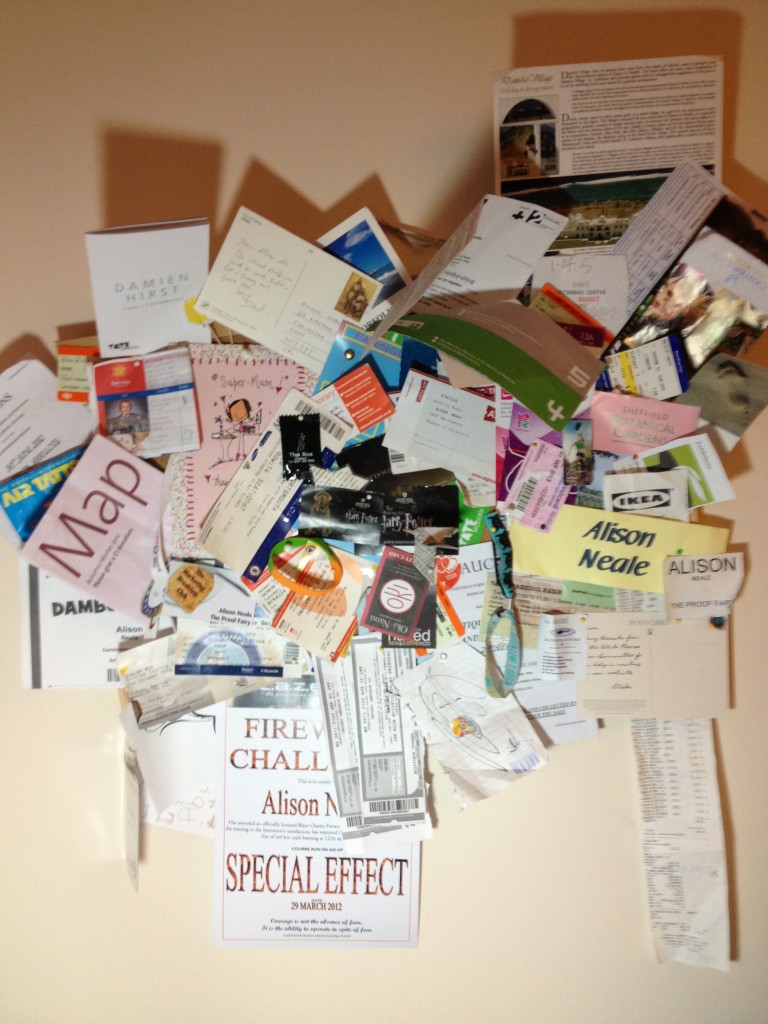