My last post talked about how peaceful and quiet life is here at Coelhosa. Over the weekend I spent three days back at Casalinho e Escabelado, my friends’ farm, looking after the animals while they had a well-earned family weekend away. And it was a complete contrast!

A couple of months ago my friends decided to downsize the animals. They got rid of the sheep and goats (sad story about them at the bottom of this post) and now have only (!!) pigs, geese, chickens, ducks, dogs and cats. They’ve also recently started a new veg garden, which is growing really well and needs plenty of watering. So my weekend revolved around feeding the farm animals, watering the veg plants and making sure the domestic animals were all where they should be.

There are around 30 pigs of various sizes and types, ranging from the immense 800lb D’Rock to tiny Vietnamese potbellied piglets. They need feeding twice a day, and water troughs filled three times a day, and I’d been given a detailed list of how many scoops of food each grouping of pigs need. I arrived at lunchtime on Friday and went down to fill the water troughs, to be greeted by a million tiny potbellies running around the field, outside their enclosure! I chased them all back in but soon realised they were squeezing through the mesh fence around their field, seemingly oblivious to the electric current running through it. Every time I chased them back in, they simply came back out the other side, so I soon gave up on that one. Fortunately, they haven’t realised that they could probably quite easily get through the fence between the pig field and the rest of the farm… yet!

It was a hot day and one group of pigs seemed especially pleased to see me. Turned out one of them had stolen the plug from one of their water troughs – not for the first time, apparently – and the other one was almost empty, too. Fortunately, the plug was nearby so I clambered into the field, replaced it, refilled the troughs and then let the water run for a while to create some mud puddles for them to bathe in.

I was sleeping in “my” caravan for a couple of nights and at 5am Saturday morning I was woken by a tremendous and scary racket coming from the pig field.  Sounding like someone was being killed, it went on for ages and eventually I got up, threw some clothes on, grabbed my head torch and made my way to the field. Turns out two of the larger pigs were shagging and the others were seemingly egging them on!  I told them I wasn’t impressed with being woken up so early and left them to it.

I had another panic when I heard a commotion coming from the duck shed one afternoon. A duckling had managed to get outside the fence and then tried to get back in and was stuck with its head one side of the wire fencing and its body hanging limply on the other. I was convinced it was dead, and went around to retrieve the body, but as soon as I got close it started to struggle and managed to get its head out and drop to the ground. With a little bit of help from me, it found the gap it had escaped through and made its way back to its family. Phew! 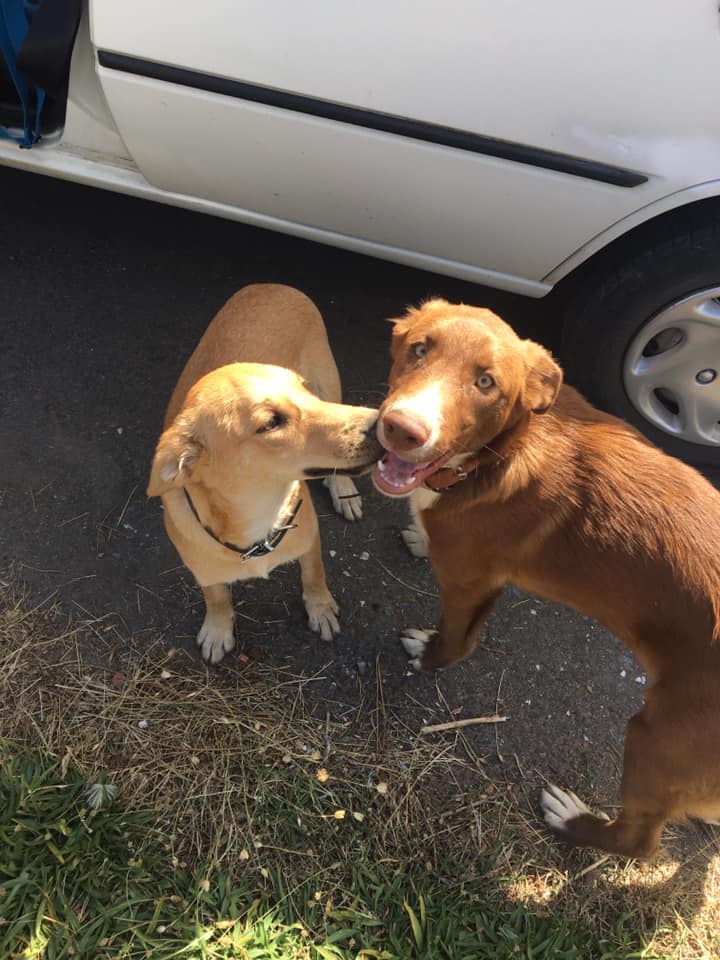 However, the biggest issue I had was wrangling the dogs. There are six adults and two puppies (Pickle’s brothers) and although they are all friendly and generally well-behaved, there’s a rota system to make sure they aren’t out causing trouble anywhere. The two bitches live outside, but only one adult male is allowed out and free at a time, so they need rotating to ensure they four males all get enough exercise and time to do their business outside the house. There’s also a line so if someone is desperate to go outside but someone else has run off, there’s that option. A couple of times I managed to let two dogs out at the same time and then waited in a state of panic for one or the other to come back! Likewise with the puppies, Perses and Haytham: together, they get into mischief so one needs to be in the house at all times, but I did accidentally manage to let both out and they ran off in delight – closely followed by my Pickle, who was delighted to be spending the weekend with her brothers! Cue me following at speed in a usually failed attempt to corral them back into the house. I certainly managed to do my 10,000 steps – and some!

On Saturday afternoon there was a storm forecast. I could see on an app that rain was on its way, so I fed the animals early and, as the thunder rumbled around, I kept a close eye on things hoping it would rain so I didn’t need to water the veg garden. Eventually I gave in and went out with the hosepipe – and of course the minute I had finished, the heavens opened! Typical. It didn’t last long though, so I would have needed to do the job anyway. 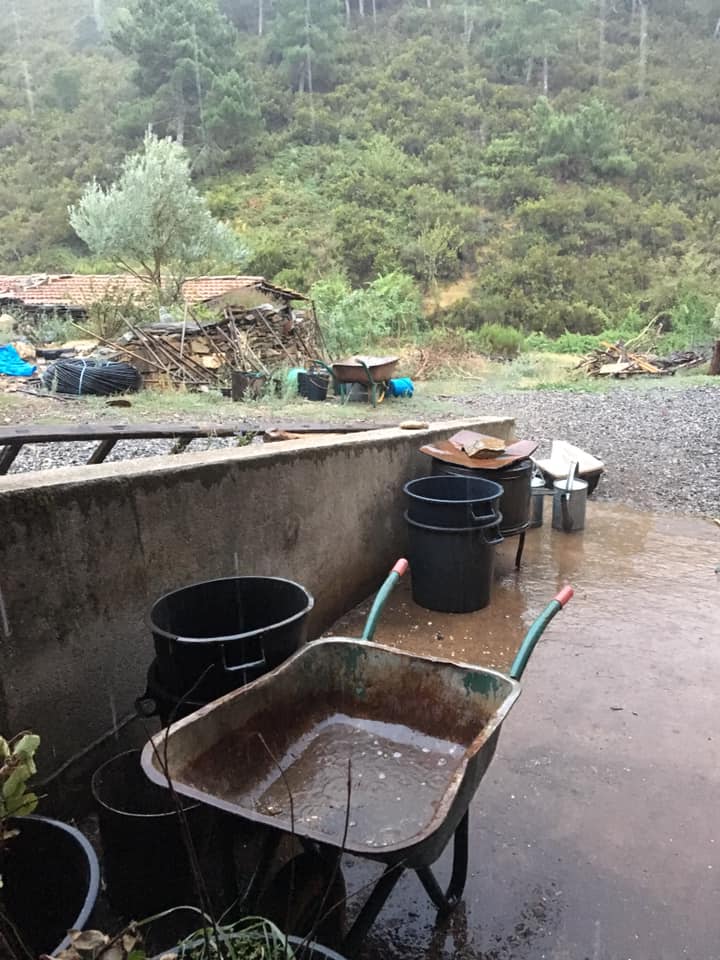 In between managing the animals, I spent the weekend watching rubbish TV – and Portuguese TV is really rubbish, I can tell you! There seems to be a constant stream of ‘roadshow’-type programmes where they visit a town, talk to locals about their latest knitting project, show some prize-winning vegetables and then invite a local musician to play – usually accompanied by an old man on a concertina. I also caught the end of the Portuguese version of The Price Is Right, complete with 1970s-throwback compere, as wide as he was short, dressed alluring in red trousers, blue shirt and braces. Most of the channels show American, UK or Australian programmes, so I also watched a couple of films, some fly-on-the-wall vet shows, a couple of house makeovers and Britain’s Got Talent, all with Portuguese subtitles. Great for helping me learn the language, I must say – though I noticed that the subtitles don’t always exactly replicate what is said … for example, in one film the Portuguese word “idiota” was used to mean douchebag, asshole and c*cks*cker!!

Sunday teatime I did the last round of animal feeding for the weekend, packed up my stuff and headed off home – via the showers at Casal de Lapa, as I was absolutely filthy! I really enjoyed my weekend away – a change is as good as a rest, as the saying goes – but both Pickle and I were exhausted when we got home and had a very good night’s sleep. And Bobcat Bob, who had been left home alone, was delighted to see us!

I didn’t post about this before because it makes me sad… my friends had arranged to sell their sheep and goats, including Sheepie. The day before I moved from the farm to move to Coelhosa , their new owner arrived with a transit van to collect them and we spent a challenging hour trying to persuade five ewes, one adolescent ram and three lambs into the van. Obviously Sheepie was no problem to get in there – I just picked her up and carried her in – and I cried as I said goodbye. But I cried even more the next day when Andrea messaged me to say that a dog or dogs had broken into their enclosure at their new home; several sheep were missing, and Sheepie and one pregnant ewe were killed 🙁