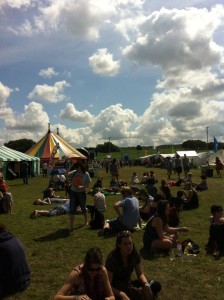 Back to Truck Festival on Saturday and wow, it’s sunny! After all the rain of the last few months we couldn’t have asked for better weather. The atmosphere seems a lot better too – the drunken kids seem to be sleeping off their hangovers and the families and “older people” (and yes, I count myself as one of them) are back, bringing with them a proper Truck festival vibe. Using my trusty Spotify playlist I’d planned out who I wanted to see for the second half of the day but the early afternoon bands were all a mystery to me – which is normally a good thing at Truck as there are often some hidden gems to be found. So first stop of the day was The Barn to see The See See, who brought a bit of Manchester rock to the festival. In all honesty I have no idea where they’re from, but they were definitely rocking the old Madchester sound, and had the haircuts to match, along with a peculiar obsession with footwear – they were keen to let us know their choice of shoes – trainers, barefoot, shoes without socks and sandals with socks! I really enjoyed their jangly rock pop but felt it was far too sunny for the gloomy Barn. (I’ve since found out The See See are based in London, though their members hale from New Zealand, Sweden, America and Leeds – not a Mancunian among them!) Lovely to see Truck founder Joe Bennett on stage doing a couple of trumpet blasts, and his brother Robin was around too.

On leaving the Barn, blinking in the glorious sunshine, we stopped to hear a bit of Yellow Fever. I’d heard them on my playlist but wasn’t expecting them to be quite as heavy as they were. Sounded okay but not what I was looking for really, so we walked back over the bridge to the 2nd stage to see Pixel Fix – chosen because we liked the name and have never heard of them! Pixel Fix are a very young band and one of Truck’s hidden gems – really good, very melodic and definitely a band to watch out for.

We liked the sound of Dubwiser so ventured back into the Barn to see them … but my Clashfinder printout didn’t agree with the official line up and it turned out it was time for Very Nice Harry. I’m sure he’s very nice but I wasn’t overly impressed so we had a bit of a wander and a beer instead!

Flights of Helios were another band with an intriguing name. We reckoned it would either be very good or very bad – but definitely heavy. I was expecting a bunch of big tattooed biker types to appear so the sensitive looking souls who walked on stage were a bit of a surprise! Their music was heavy, in parts, but it also combined thoughtful math-rock with vocals that veered from a swing style to Irish folk music! It was a very interesting combination and defined Flights of Helios one of the more unusual highlights of Truck.

The Last Republic were one of the bands I’d earmarked to see but the 2nd stage was rammed so we listened from outside whilst messing around with the circus skills equipment, as you do. They sounded really good, and I especially enjoyed their cover of Depeche Mode’s Enjoy the Silence. I’ll try and look out for these guys and see them properly some time.

Over to the main stage for the brilliantly named Dog is Dead (Whose dog? How did he die?) who were perfect sunny festival fodder. Great melodic songs that the crowd bounced along to, and some great singalong choruses for those who knew the words.

Truck regulars This Town Needs Guns were next, and again the 2nd stage was packed and we listened from outside while chatting to some people we met back in 2008! To be honest the band sounded a bit ropy, but that could be because (a) we were outside and (b) I wasn’t really paying that much attention to them, so I’ll give them the benefit of the doubt!

I was determined to get into the tent for the next band though – Man Like Me were the ones that really stood out on my Spotify playlist, with their track Squeeze being the one track that made me want to dance. I was hoping the band’s live performance wouldn’t disappoint, and it didn’t! When a set starts with a skinny man wearing nothing but pants appears straddling the shoulders of a big Nigerian guy in national dress, you know something special is going to happen! Man Like Me don’t take themselves too seriously and their set included bouncy music, crazy dancing and lots of dancing. Definitely one of my Truck highlights and almost – but not quiet – made up for the absence of the legendary Mr Shaodow!

65 Days of Static are another band who have played Truck a fair few times, though I’ve never seen them before – I did try to get into the Barn in 2010 but so did everyone else and I missed out. I was determined not to miss them this time, and thoroughly enjoyed their fast, furious, loud guitar rock. In a complete contrast, The Low Anthem were low fi to an extreme, but sadly I wasn’t impressed by their melancholic tunes, which felt like dirge at times. They have their fans but I’m afraid I’m not about to become one.

Apparently King Charles was on Radio 1 this week (I didn’t hear it, I’m too old now!) so we made a beeline for the 2nd stage to try and actually get in the tent. We managed, and were rewarded with an excellent set from a singer/band who are hard to define. Is it rock, pop, folk, rap? King Charles seems to combine every musical genre and make it work, and the music was lively and engaging and had us all dancing along. Probably another of the top two or three bands we saw over the weekend, and one I will listen to again.

British Sea Power have a huge army of fans and they were in evidence at the main stage, shaking their branches along to the music. I like BSP and have seen them a few times before but wasn’t quite as enthralled by them this time – perhaps the excitement of Man Like Me and King Charles took the edge off a little. They put on an entertaining enough set though, and I was especially pleased to recognise a couple of their older songs too.

Fast heading towards the end of Truck, we paid our final visit to the 2nd stage to see Frightened Rabbit. Again the tent was very full but by now, being old, we were fading fast so opted to sit on the grass outside. It was a very entertaining set that brought to mind a more rocky version of Stornaway.

And so to the final band. The Temper Trap have completely passed me by, though my daughter is a fan, and even though I’ve now heard and quite like Sweet Disposition I wasn’t hugely excited about seeing them. We listened to a couple of songs and thought they were okay but nothing special – so we opted to spend our final hour at Truck 2012 in a very civilised manner, sipping wine while relaxing on a sofa in the bar!