Why it’s on the list: I keep saying I’ll start growing my own veg but never actually get round to it! Hopefully this will finally make me do it.

How/when I’ll judge this task to be completed: When I have successfully grown and eaten five different fruits or vegetables I have grown in the garden.

So at the beginning of June 2011 I planted out lots of pots with a variety of herbs and veg – to start with I had two tomato plants, two pepper plants, a chilli, a strawberry left from last year, and some herbs – basil, chives, rosemary and fennel. I stuck a few flowers in the pot to make it look pretty, too. This is what my little veggie corner looked like in June:

It’s now August and my veggies are, on the whole, doing really well! I acquired some more pots and some bean plants, courgettes, mint and a tiny cucumber plant. The courgettes seem to get about_this_big and then die, and something’s ravaged many of the herbs, but I’m really pleased with how it’s going and am enjoying seeing the fruits (veggies!) of my labour ripen! Ten weeks on my garden looks like this:

I’m not going to count the herbs towards this challenge, so here’s the progress:

1. Peppers …. I probably picked these a little too soon but we were going on holiday and I didn’t want to lose them to slugs while we were away. Had them in a pasta sauce.

2. Beans … I’m not actually a huge fan of beans … or I wasn;t till I ate theme home grown ones! They’re actually better raw than cooked – or maybe I overcooked them a bit. Anyway, they were sweet and succulent – since whenhave beans been sweet and succulent??!

The sad tale of my chilli plant …. it was doing really well and was laden with green chillis that I wanted to ripen – and then it died overnight. We had a very heavy rainstorm so I don’t know if that did the damage, or a cat jumped on it, or it was got at by slugs … who knows? Anyway, I rescued the chillis off it and used a couple in a pasta sauce but they weren’t really ready, they were too bitter really 🙁 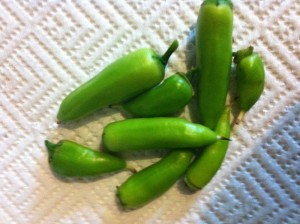 My tomatoes took forever to ripen (and in fact even now, on the 1st November, there are still tomatoes ripening on the plants) but when they did they were really sweet and lovely. 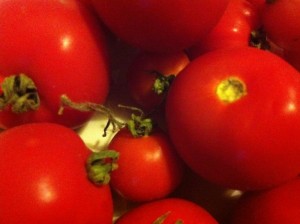 So that’s it for this year’s crop. I was also growing a cucumber plant (eaten by slugs), courgettes (turns out the containers were too small so they never got bigger than about 3 inches) and strawberries (not a single fruit all summer!) We had herbs too – basil and rosemary and chive and fennel and parsley – some of which grew, some were eaten by the neighbourhood slugs. SO I’m one fruit/veg off completing this target …. will get this finished in 2012!

UPDATE: I didn’t do any gardening in 2012 – a combination of moving house and the rubbish weather – but I’ve decided that actually of course the herbs count – so this challenge is completed!