So today we were shopping for scallops in Tesco’s and I noticed some oysters on the counter, and decided to buy a couple so I could cross number 23 off my list of 101 things to do in 1001 days. 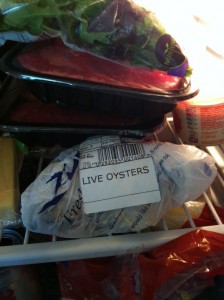 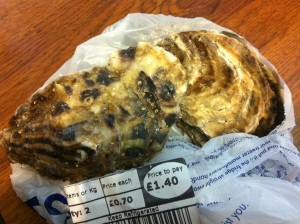 No idea what to do with them but luckily Steve has had them before, so I left the preparation to him! After some struggling he managed to get the shells open. I was undecided whether to have mine as it came, or with some sort of dressing. 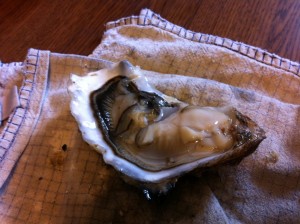 Anyway, Steve decided to have his with some finely chopped shallot, vinegar and lemon juice so I had mine the same. Katie was given the job of filming the eating to prove I really did have mine, but unfortunately she caught the record button twice … so you can see I am about to eat, before the film stops. There’s about a second of footage – and it’s on its side, and I can’t work out how to turn it round.

I promise I did eat it though!

It wasn’t nearly as nasty as I was expecting. Steve described it as “fishy snot”, which brought to mind laverbread, but that truly was disgusting, and this was actually quite palatable. Because of the shallots I had to chew it and I rather liked the salty seasside flavour, and can still taste it now. I haven’t become incredibly randy … yet …. thought oysters were aphrodisiacs?! But anyway, I quite enjoyed it so I know if I’m ever likely to be asked to eat oysters in polite company (which is hardly likely to happen, but you never know!) I will know what to expect.