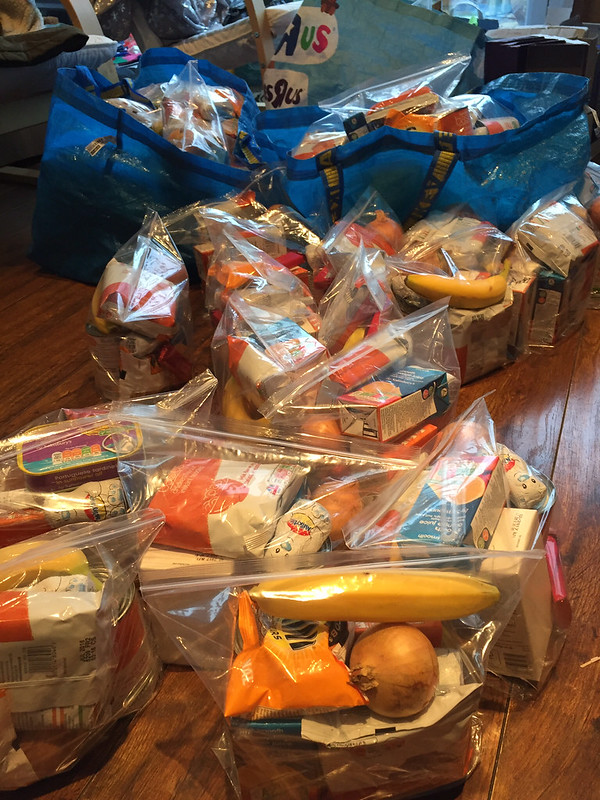 Apologies for the tardiness of this blog post. I made my eighth trip to the refugee camp at Calais two days before Christmas, accompanied by my kids, Katie and Dan. We'd originally planned to go over only to see “our” Eritrean boys and take them a few treats. However, it seemed like a long way to go just for that, so I asked on Facebook and via my business newsletter if anyone wanted to contribute £3 for a food package. I thought we might be able to make up maybe ten or perhaps even twenty, but was blown away when £400 dropped into my PayPal account from over twenty-five different people who wanted to help! Eventually we spent around £200 on food to make up sixty food bags, each containing kidney beans, tinned tomatoes, sardines, noodles, fruit juice, an onion, a banana, a KitKat, a bag of cheese biscuits and a chocolate snowman. Enough to give sixty or so people a decent meal and a couple of treats. We also bought a good supply of food for the Eritrean lads we've been supporting. The other £200 was given to the Swindon Calais Solidarity group and they went into the camp between Xmas and New Year with more food. 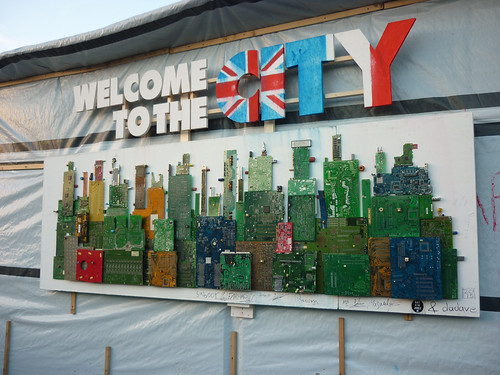 Because it was the holiday period, our choice of train was limited to 8.20 or 12.20 so we were up ridiculously early and on our way down to Folkestone. On arrival the boards reported a half hour delay but after grabbing some breakfast we were soon on our way under the Channel over to France. My biggest concern was where we were going to park – food parcels are very heavy to carry and we knew we wanted to get to the Eritrean and Sudanese part of the camp near the bridge, but on previous visits the police had been stopping people going in that end of the camp. Once again the road through was blocked with CRS vans, but we drove round and in at the other end, all the way through the camp and were able to park right by the section we wanted to visit! There weren't many people around and for once we were able to get the bags out of the car and walk where we wanted without being mobbed. The paths were also a lot less muddy than we've seen recently; I think there had been a welcome dry spell. 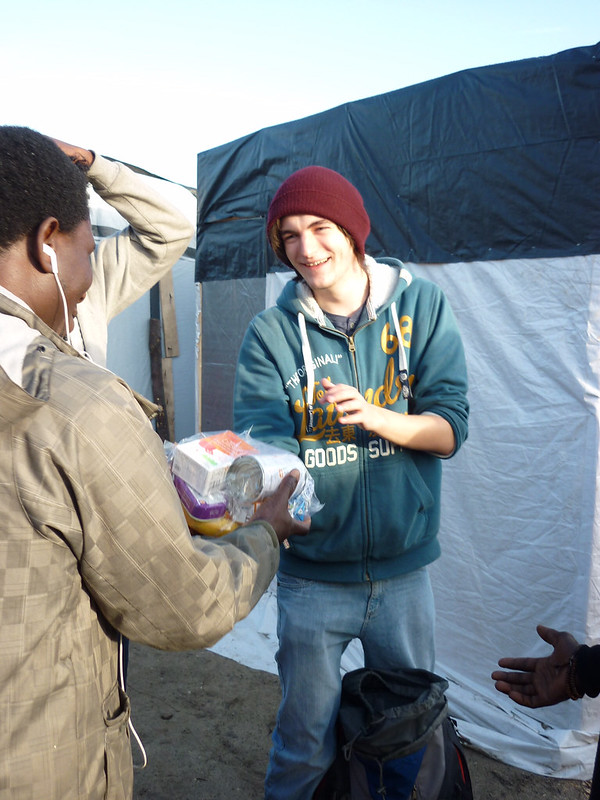 In fact, it was the calm atmosphere that really struck me. A few trips earlier we'd been horrified by the desperation, as crowds of people asking for food surrounded us at every turn. This time people seemed more relaxed, and we were greeted with lots of smiles and waves. I don't know what might have changed – perhaps it was the spirit of Christmas, the slightly better weather, a recent delivery of food … Who knows? Every time we've visited the atmosphere has been different; it's something you need to be prepared for.

Anyway, we found our boys and Dan immediately set about handing out the food parcels to the Eritrean people while Katie and I were invited into the new community kitchen for a cuppa. In fact, Dan did a marvellous job of distributing the food – Katie gave out six bags and I didn't give out any, because Dan did the rest himself, including walking deeper into the camp to reach the Sudanese section. It was lovely to be able to give people some much needed food – thank you so much to everyone who contributed!

However, I was also struck by the futility of our actions. It took so much time and money to buy, sort, pack and transport the food, plus the expense of travelling over to France, yet we were able to provide enough for one meal for less than 1% of the camp …. It really hit home just how mammoth a task it is to provide 10,000 people with enough food to survive.

Once Dan had run out of food we visited our friends' house where we spent a happy hour laughing, chatting and singing! Dan had gifted them a Bluetooth speaker and we'd taken over a memory card with some rap music (at their request) and we had great fun singing along to Tinie Tempah and Eminem! We also listened to Eritrean music and were taught how to dance the Eritrean way – it's all in the shoulders! 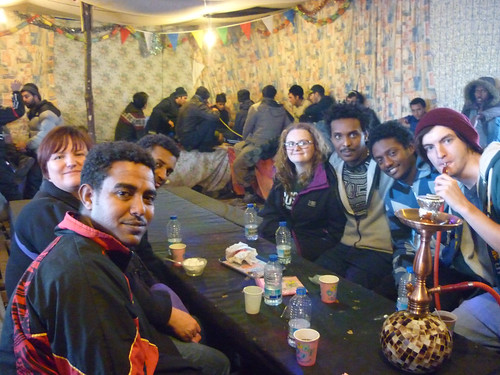 Then we moved on to our favourite restaurant and ordered enough food to feed a small army! Beef stew, fried chicken, rice, salad and flat breads soon filled the table and we encouraged our friends to eat as much as they wanted! For 35 euros, seven people had a veritable feast! Our friends taught us Eritrean and we taught them English, and soon we were all saying we were “zageeba” (the Tigrinya word for “full”). We drank sweet Afghan tea and shared a shisha, and chatted like good friends about our hopes and dreams. There was a lovely atmosphere in the cafe – people were watching a weird Arabic music show on the TV (it looked like a lot of bored housewives dancing in their kitchens!), and were singing and dancing along with it. It was one of the most wonderful times I've had in the last year – just friends enjoying each other's company. The boys said for them it was their Christmas Day, their Christmas meal. That made my day… And broke my heart too, that they didn't have anything else to look forward to. 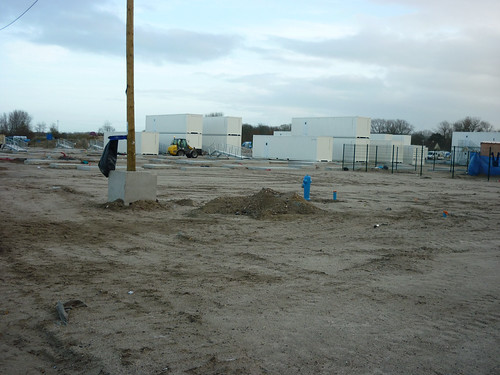 After the meal the boys went back to the tent to rest up a little before making their last attempt before Xmas to hide in a lorry, and we went for a wander. I wanted to find the dome that's used for art, music and theatre, but we headed off in the wrong direction and instead ended up at a new part of the camp where the French government have bulldozed the land and are installing huge white containers for people to live in, within a fenced compound. Rumour has it there will be armed guards, the residents will all be fingerprinted and no one will be allowed out of the compound. While I appreciate that the containers will be warmer and drier than tents and tarpaulins, I fear it will be more like a prison camp whereas The Jungle, for all its problems, has a wonderful community spirit.

There's a lot of artwork in the camp and I'd quite like to photograph it all, but this time I just took a few photos – but I did get the chance to check out the Banksy that appeared recently on the underneath of the bridge. The Daily Mail had reported that refugees had covered it up and were charging people 15€ to see it but we certainly didn't have to pay! It's very cool, and the graffiti written around it – plus the tent on the left and pile of tear gas canisters on the right – fit in well. 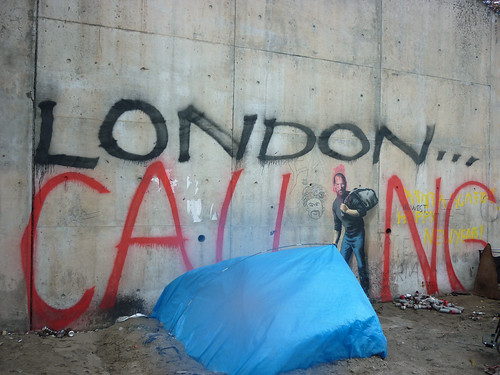 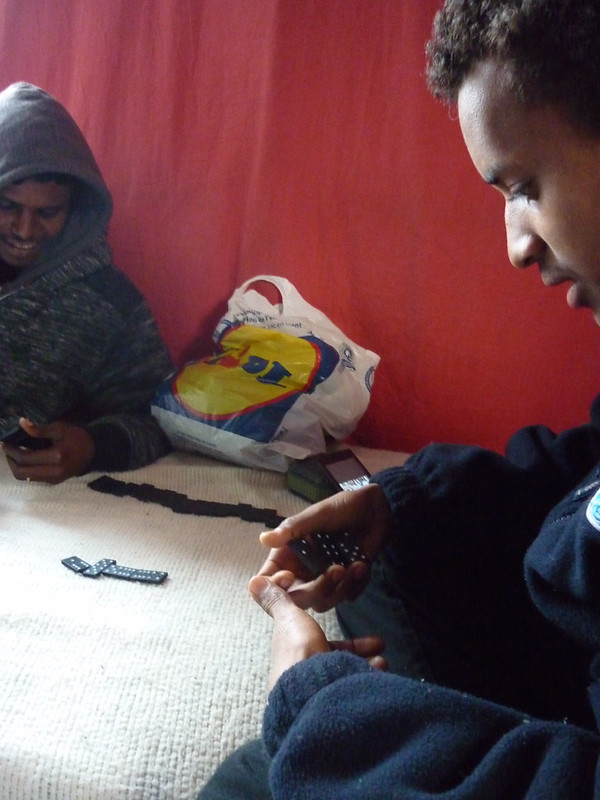 We went back to our friends' house and spent the last hour of the day chatting some more, listening to more Eritrean music and playing dominoes! Finally we dragged ourselves away – we had to collect some clothing from near the Eritrean church to bring back for a couple of people who had made it over to the UK. We said our sad farewells and left our friends behind, to face Christmas in the camp and who knows what in 2016.

Because I really don't know what the New Year holds in store for them, or what my involvement in Calais will be going forwards. Taking time out over Christmas has given me the chance to reevaluate the situation and how I can help, and I'm really struggling to know what to do. Part of me would love to go over there for months at a time to do what I can to help – perhaps helping in the kitchens or the warehouse, or providing some sort of support on the ground. But the problem is I have commitments here – a family, a home, two businesses. 2015 was a bad year for the businesses anyway and my heavy involvement in Calais since September has distracted me further still, so I'm now poorer than I've ever been. And while that's not a problem compared to the problems of the people in Calais, I can't help anyone if my own life is in chaos. We are facing a second house move in eleven months and there's stuff I have to do, and I absolutely have to refocus on earning money so I can support myself and then support other people. I've also invested so much emotionally in Calais, at times I've felt close to breaking point, and I feel I have to take a break now, step back and care for myself for a while. If that's selfish, I'm sorry…

And then there's the huge scale of the problem. As a group we have spent thousands of pounds on transport to and from Calais, supplies and food, plus of course hours of our time, and that's just not sustainable long term. We are all feeling fatigued and in need of time to regroup and refocus on our own lives for a while. Plus, of course, for all our effort we are able to help just a tiny percentage of the people there, maybe one or two per cent.

So I am going to step back for a little while, get my house move completed, see how things stand in February and then decide how to support the refugees from there on. It might be through raising awareness or campaigning for political change; it might be raising money for the groups already on the ground to provide support; of course it might be I go back and help long term. But the fortnightly trips are likely to stop, because they just take too much time and money to help too few people. It's perhaps got to the stage where we are actually going over more to satisfy our own needs, to see our friends rather than to provide support and help, and maybe that's not the best use of our resources. I don't know right now what the best solution is, but my head is currently full of packing and house moves and there's no room for much else. Once that's out of the way I'll perhaps have clearer vision of how I can help effectively over the long term. It's going to break my heart not to see Ridwan, Abel and the other boys for a while, but I really don't know what else I can do right now.