So thing #100 on my list is “Learn how to meditate” and ok, I’ve left it a little bit late, given the list ends on Saturday, but today I went to The Centre of Light in Shrivenham, Oxfordshire and spent a couple of hours on a meditation taster session, learning why meditation is beneficial and how to start doing it. 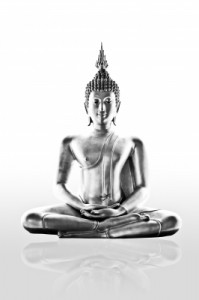 Meditation is one of those things I’ve always wanted to understand but I’ve shied away from as I don’t really do “new age”. However, from reading a little about meditation I started to understand that there’s nothing airy fairy about it all – in fact, it’s a form of deep relaxation, time to live “in the moment”, to still your mind from the endless noise and to get your body and mind in touch with each other. It was on the list because I don’t really ever relax – I’m always thinking about something or fidgeting – so when I met Catherine from The Centre of Light at a networking meeting and she told me about her meditation taster session I booked my place straight away.

So this morning I arrived at the Centre and Catherine showed me into her meditation room. It was simply decorated and fortunately wasn’t overly new agey – I was expecting incense and angels all over the place, but the few crystals and Buddha statues were discreet and did add to the atmosphere of the room. There were three of us there for the session, all women, and  we started by introducing ourselves and talking a little about why we were interested in meditation. The other women already had some experience of alternative therapy type things such as EFT and reiki, so I was definitely the novice!

Catherine then talked a bit about how meditation works and why it’s good for you. There was lots of talk of energy flowing around the body yada yada and I’m not sure how much I believe in that, but the experience that followed may have gone some way towards convincing me!

We then began the meditation, and over the next hour Catherine took us through three meditation techniques. We began with a slow breathing exercise – in for four, hold for four, out for four, hold for four – and I started to feel very relaxed and a bit “spaced out”. Then Catherine took us through a guided meditation where she asked us to focus first on the soles of our feet and then gradually work our focus up through the knees, thighs, hips, stomach, spine, eventually reaching the head. I’ve done something like this before during a taped hypnotherapy session but combined with the deep breathing we were doing I felt an enormous sense of calm come over me, and my body began to feel very heavy and relaxed. I felt completely rooted to the chair, as if I was incapable of movement, but I wasn’t scared; in fact I felt completely at peace, more peaceful than I can ever remember feeling before. It was a very odd feeling – but odd in a good way – and I was reluctant to return to the real world when Catherine finished the meditation. The other people started talking about their own experiences and I found I was super sensitive to the sound of their voices; I wanted to remain completely silent and still and bask in the relaxed feelings that were coursing through my body.

Then Catherine showed us another method which involved visualisation  – we again focused on breathing but then had to visualise waves on a beach. I struggle with visualisation and found it much more difficult to relax with this method. I did get there eventually, and in fact I found it very difficult to come back to the here and now at the end.

The third method was a Buddhist one that revolved around love and gratitude. The scenario Catherine gave us was of a flower in the place of your heart, that unfurls; an image of yourself and your loved ones in the flower; all the love in the world focussed on that flower and the people within it. It sounds a bit cheesy here but was actually quite acceptable and lovely but I think I was still so chilled from the previous meditation that I just let go and fell deeper and deeper into relaxation. I could feel energy – or something – flowing through my body and a tremendous sense of peace descended on me. At one stage a ray of golden light seemed to beam down on me – I think the sun just came out but the transition from shade to light had a deep effect on me in that meditative state. I could have stayed in that place forever but sadly, as this was only a taster session, Catherine brought us back and again I found it quite difficult to adapt to the noise and brightness of the room. I felt calm, relaxed and quite light headed and it took a good few minutes before I felt grounded again.

Before leaving the Centre we discussed our experiences and Catherine told us about a 5 week beginner course she runs. I’m very keen to take this further but typically it’s on the only night of the week I currently do something so I’m hoping Catherine will run a daytime course too. I’m keen to carry on exploring meditati0n and will definitely try the techniques out  at home. We used music with the third meditation and that really appeals to me, or perhaps some white noise such as the sound of the sea (which might help with the visualisation!)

Two hours on I am still feeling very calm and at peace with myself, which is a good feeling to have. I still don’t fully understand how or why meditation works, and I’m still pretty cynical about the whole “new age” thing, but something has definitely had an effect on me, and I want to experience it again.