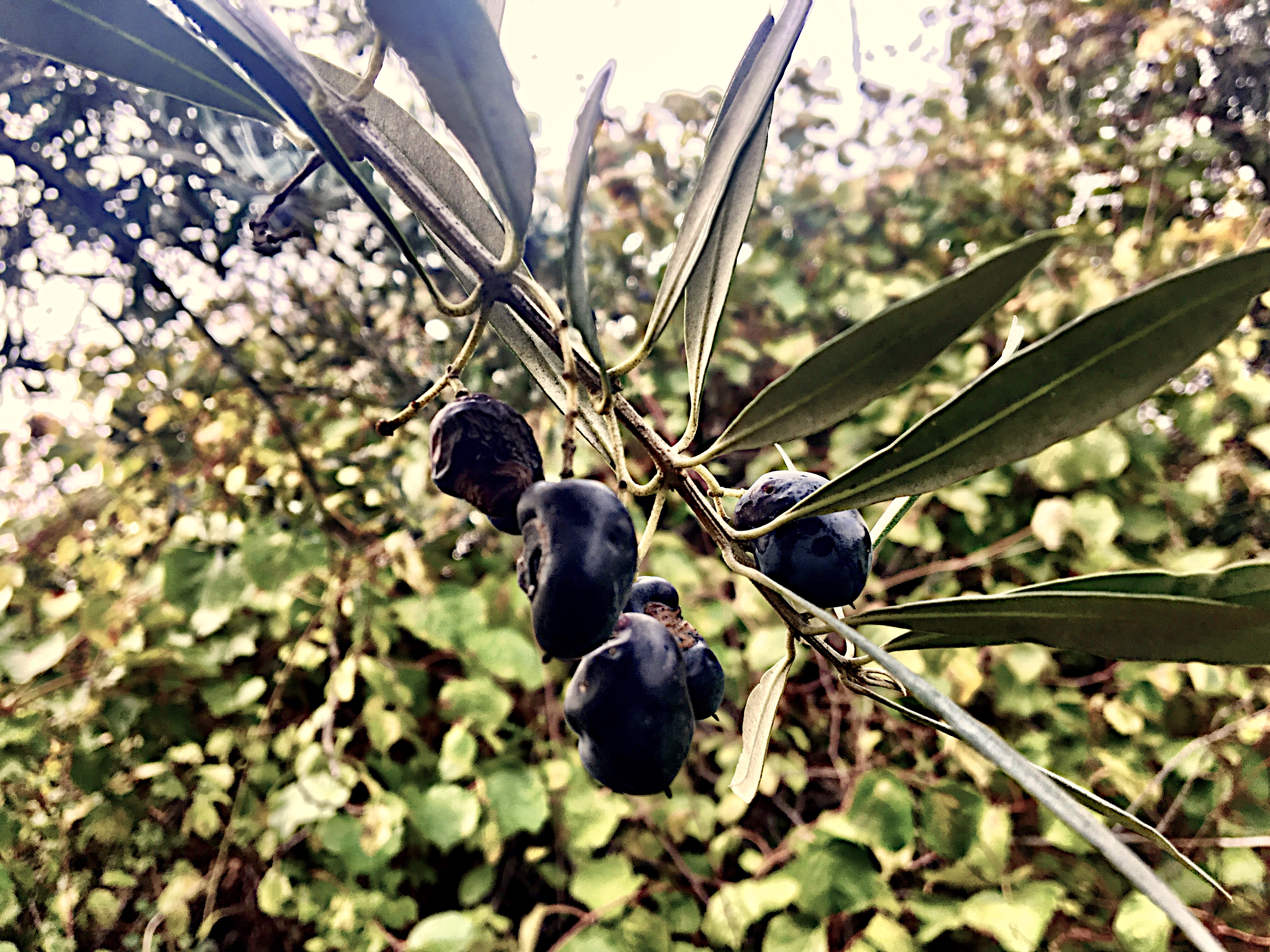 Thank you to those people who have sent me lovely messages since my last, rather sad, post – it really means a lot to me! I’ve even had a few real letters in the post box, which really made my day. Writing such a raw and honest post actually felt really cathartic and I’ve felt much happier over the last couple of weeks.

I had coffee in Pampilhosa with my friend Andrea about 10 days ago and she warned me to expect an influx of people to the village over the weekend. While Halloween isn’t much of a thing here in rural central Portugal, the next day – All Saints’ Day – is a public holiday and much celebrated, especially by people going back to visit relatives (dead or alive) in their ‘home’ villages. I was glad she’d warned me, because I arrived home to find a strange car parked outside my house and a man unloading bags and cases! Turns out it was my part-time neighbour Fernando’s wife’s cousin, husband and son, who own the house below Fernando’s. Two days later I came home from doing some shopping to discover Fernando and Mr and Mrs Lopez here – so, including me and my one permanent neighbour Fernanda, it brought the total number of residents in the village to an unheard-of eight! So for the first time since I’ve been here, there’s been something of a community in the village – wasn’t that exactly what I asked for in my last blog post? Funny how the Universe does seem to deliver…

On Sunday there was an All Saints celebratory brunch in the nearby village of Pessegueiro, which I was invited to. The night before was horrendously windy and my drive out of the village was nearly stymied by three trees fallen across the road! Fortunately there was just about space to drive round them, and later in the day Fernando and Mr Lopez went out with saws and moved them. It did make me wonder, though, what would happen if trees block the road when there’s just me and housebound Fernanda here. There are so many dead trees around here, a result of the devastating fires of 2017, and dozens have been brought down in the high winds over the last week or so. 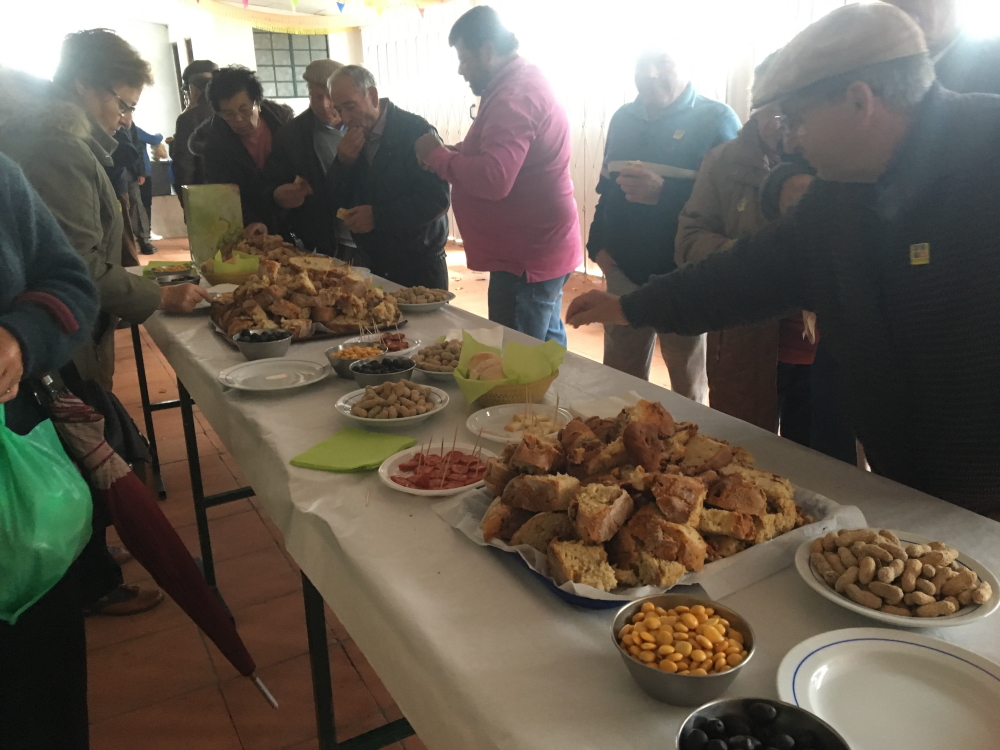 The brunch was in the casa de povo (community-run café/bar/social club) and it was an impressive , if interesting spread. Delicious bread filled with bits of sausage and olive, chorizo and cheese on sticks, olives, yellow lupin beans, and monkey nuts – not the easiest finger food as you end up with a handful of shell! There was also wine and soft drinks, plus huge baskets of bread rolls for people to take home – and all for free, funded by the ‘league of friends’- type organisation in the village. There was a lively buzz of conversation – which, of course, I had no chance of joining in with – but I did spot the two Marias from Coelhal (my friend Helder’s mother and aunt) so I sat with them and we smiled and laughed together at our inadequacy to communicate. I also met a man called Manuel who speaks pretty good English – he worked at a hotel in Lisbon and learned the language while there, but he is now retired and says he doesn’t get a chance to practice so is keen to talk to me whenever he sees me! 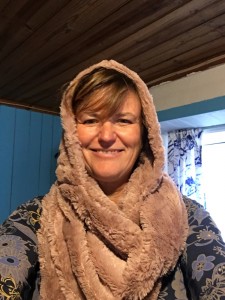 Before I left for the brunch a car arrived and out stepped two of the mysterious cousins who gave me a box of crockery a few weeks ago. They started unloading stuff from the boot of their car and before long presented me with five bin bags of clothing, towels, sheets and blankets, plus two dining chairs and an occasional table! I’ve obviously become the local charity case – the crazy British woman in the shack in the mountains – but although I find this generosity a bit overwhelming, it’s all so well intentioned, and most welcome. And there were some nice things among the bags, including some lovely snuggly thick blankets and a gorgeous hat/scarf thing! I’ve discovered it’s often colder in my bedroom than it is outside, so the extra layers are all very much appreciated. My woodburner does a great job of warming up the living room (though the heat doesn’t quite permeate the chill of the bedroom) but I’m fast running out of firewood that Fernando donated and I can’t afford to buy any more right now, so I am trying to limit the time I use it to evenings only. (Donations towards wood most welcome – I need to find around 120 euros!)

The weather has been pretty dreary this week – cold and damp, with a few torrential rainstorms – but country life goes on, and the Lopezes had some local men come in to help with the olive harvest – and I got involved too. Mostly this involved raking olives off the trees, or off branches that had been pruned from the trees by a man up a ladder with a saw. It’s been quite a jolly time – although I can’t get involved with the banter I recognise the odd word here and there, and there’s been music and laughter. Not least when I heard the sound of a cat mewing over and over and was frantically looking for BobCat before I realised it was someone’s phone ringtone!

The last day of the harvest was very cold and drizzly and I really didn’t want to be outside, but Fernando asked if I would help and he does so much for me, and asks for nothing in return, so it felt rude to say no. Within minutes my hands were bitterly cold and I was soaked from the waist down (my raincoat did a good job of protecting my  top half) and it was with huge relief that the final tree was pruned and harvested. We were rewarded for our efforts with lunch and then later, after I’d helped the Lopezes filter the leaves out of the olives and bag them all, ready for pressing, they gave me supper too. So generous. They now have a shed filled with around 1000 kilos of olives, which will make about 100 litres of oil, apparently. That’s a lot of oil!

Having all these people in the village has been really good for my spirits and it’s been nice feeling like part of a community. I’ve had lunch several times with the Lopezes, Fernando has been as friendly and generous as ever, and to be honest it’s lovely knowing there are people around and looking out for me. Pickle has also really loved all the attention and has learned that she doesn’t have to bark and jump at everyone to get love, which has been an important socialisation lesson. However, Fernando’s wife’s cousin and family are returning to Lisbon tomorrow, Fernando and the Lopezes will be leaving next week and then it will just be Fernanda and me again, plus our assorted animals. With winter setting in, and the days shorter and colder, I know I need to work hard to keep my spirits up. I’ve become aware that I while my days away achieving very little (too many pointless iPad games and chick lit books!) so today I’m going to devise a rough schedule for my week, to include a mix of practical things – Proof Fairy work/promotion, gardening, yoga, blogging, study (I’ve started a free OU course on philosophy) and fun things, like art journalling, reading, crochet and Netflix. I hope having some sort of structure to my day will help me feel more focused and less alone. And of course I’ll be looking for social occasions, whether that’s coffee with friends, my weekly Portuguese lesson or visiting local events.