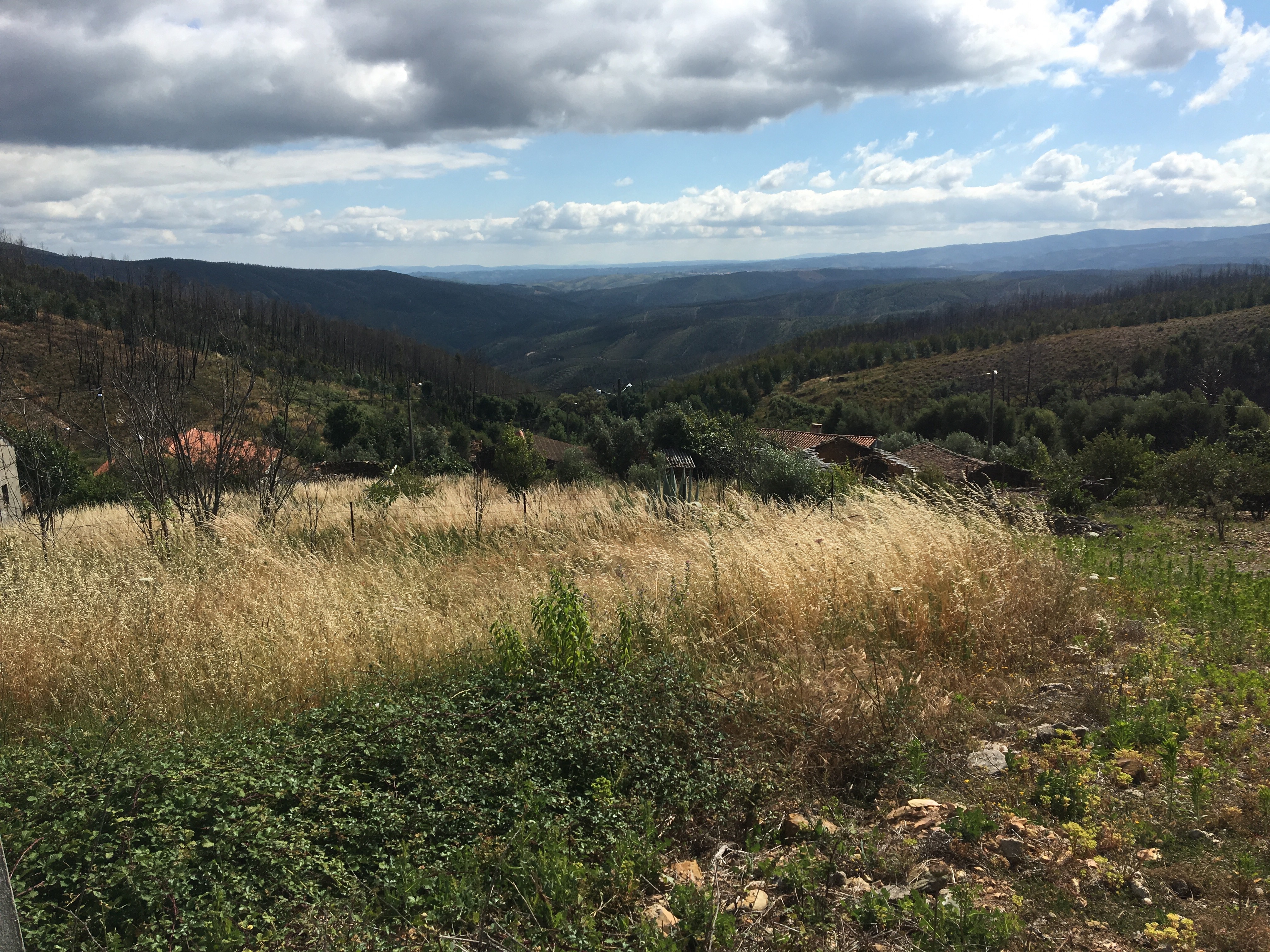 So here we go, the beginning of a new phase in this midlife adventure, a new chapter in my life. Living alone! It’s the first time I’ve done this since I was 20, I reckon … though back then I was renting a room in a shared house in a London suburb, so was never entirely on my own. This time it’s different.

On Thursday last week I loaded up my car, waved goodbye to my friends at the farm and drove the hour or so to Coelhosa, a tiny village between Pampilhosa da Serra and Gois. As with so many places in Portugal, the complex inheritance laws and lack of work for young people mean almost all the houses were abandoned some years ago, and all but six were turned to rubble by the huge fire that swept through this area in 2017. Fortunately, my friends’ house was one of the ones spared, though much of their land, including the olive grove, was destroyed.

My friends lived here when they first moved to Portugal in 2005, and began working the land, but their ambitions grew, hence the move in 2008 to the farm at Casalinho, which had much more potential for farming. Friends have lived here in a care-taking capacity on and off ever since, though it’s been empty now for about 18 months, until now.

Its a tiny place, but perfectly sized for me, especially after living in a caravan for five months; in fact, I’m not sure what to do with all the space! Originally two bedroomed, it now comprises two rooms – a large kitchen/living area and a good sized bedroom. Although basic, it provides (almost) everything I need: the house has electricity, there’s a gas stove and oven, open kitchen storage, a sink, a fridge, sofa(bed), armchair, small table and chairs, and there’s a mattress in the bedroom, though I should be able to get a bed frame over here in the next few days.

All it’s missing at the moment is a water supply and internet. The water is being installed some time this week and in the meantime I fill water bottles from a freshwater supply down a stony path at the rear of the house. The bigger issue is the lack of internet ???? There is a very intermittent 4G signal, so I’m not completely cut off (and can usually find a stronger signal if I wander around outside), and I can make phone calls, but I am struggling a bit! Fortunately the nearby village of Pessegueiro has public internet, so I can drive there if I’m desperate, and at some point I’m going to sort out a mobile WiFi router and try and work out where it will work best.

As with the caravan, it was really important for me to make the cottage feel like “home” as soon as possible, so sorting out the living area was one of my main priorities. There were some kitchen bits here already, Andrea lent me some things and I’ve bought a couple of essentials, so I’m set up to cook. I also sorted my clothes into some plastic storage crates, and filled the rather rustic shelves with books, bits and bobs (or tat, as Andrea describes it!). The place looks very lived in already!

My next task was to clear the path to the compost loo, which is located about 15 feet away in the garden, on a raised terrace opposite the front of the house. Despite my friends doing a lot of strimming earlier in the year, the garden has become very overgrow, with thigh-high grass and brambles blocking the path. A morning spent pulling it up in the blazing sun was a morning well spent, especially as it’s raining today and I wouldn’t have fancied walking through the sodden grass several times a day! Having said that, the loo is strictly for solids only, as pee will make it smell; there are plenty of places to squat though, and an overnight bucket in the bedroom. As the house has been empty for a couple of years Andrea suggested now was a good time to dig out the loo pit – not nearly as gruesome as it sounds, as all the waste has successfully composted and it was just like digging out mud. It’ll take me a while to fill the space with my own waste…

I also cleared a small area for sitting out. It seemed important to have somewhere with a nice view, considering the stunning scenery around here, but the windows overlook either the garden wall or other houses. So now, just a few steps away from the front door, I have a seating area, under an olive tree, with a view of the mountains. It’s lovely out there – Saturday evening I could see fireworks in a nearby village – and the 4G signal seems fairly consistent too! 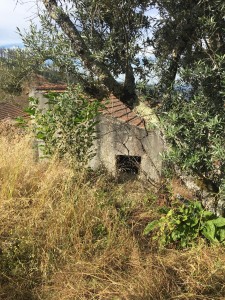 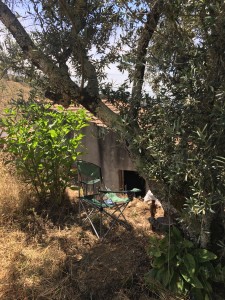 My next door neighbour is Fernando; he lives in Lisbon but comes here now and then, though I haven’t met him yet. However, I have met Silvana and Arnaldo, who own a house and land nearby, though they don’t live here, and simply come to maintain the garden from time to time. They knocked and offered me some home grown lemons, and we had a very random conversation where none of us knew what the other was saying, but we all laughed a lot. Then they said “Vamos-la!” (Let’s go!) and dragged me to the other side of the village to meet Fernanda, who is the only permanent resident in Coelhosa. A recent widower, she is old and quite immobile, but was tending a beautiful flower and vegetable garden when we arrived. Again we talked without understanding, and smiled a lot, and it was all very jolly in a bizarre way.

Fernanda also has a dog, a square yellow thing that barks a lot at night. And I have a dog too! I was really taken with the puppies back at the farm, and couldn’t resist bringing one of them with me. Pickle is living up to her name – she loves eating my slippers, cries half the night when I shut her out of the bedroom, and drops the most stinky farts, but she also greets me like a long lost friend in the morning, is endlessly entertaining and great company. I’m rather enjoying being a dog owner! 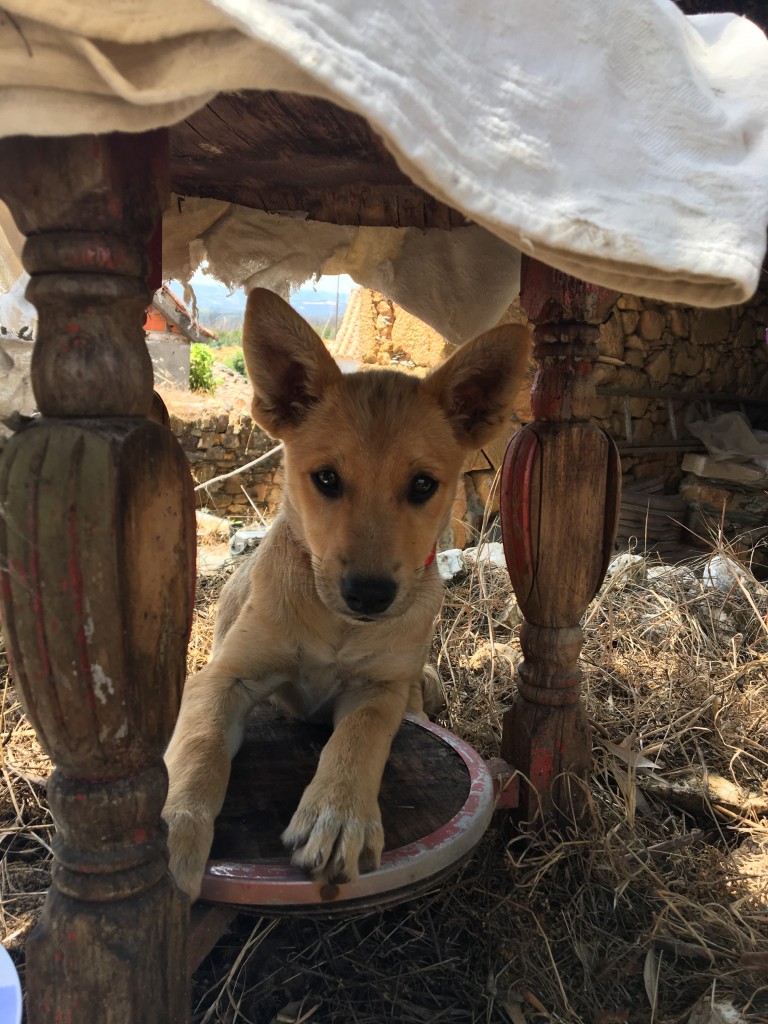 3 thoughts on “My first few days at Coelhosa”