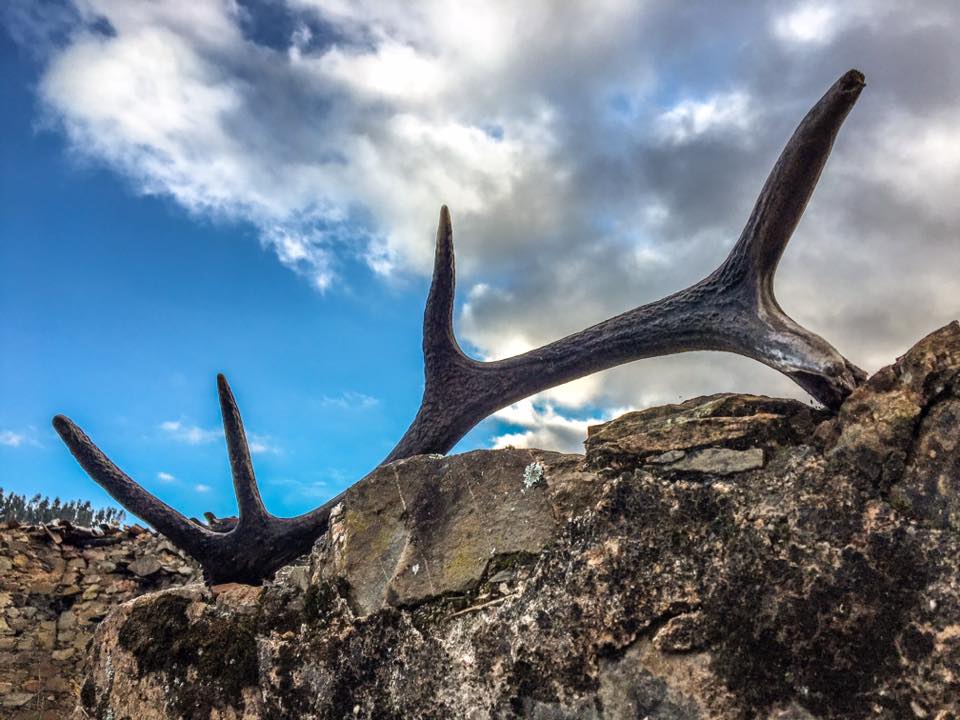 I was planning on writing a long post about Christmas back in the UK, and then another one on my first couple of weeks back in Portugal – but I’ve suddenly realised we are nearly at the end of January and I’ve done neither! So this will have to do …

Christmas in the UK was lovely – I’ve loved living in Portugal, but I miss my family so much and it was fantastic to spend a couple of weeks with them. However, it was pointed out to me that my social skills seem to have disappeared now I spend so much time on my own, and I admit I did find being with people 24/7 quite tiring (sorry folks!). But we had a lovely time, and it was so good to have everyone together for carols in the marketplace, followed by a couple of drinks and pizza on Christmas Eve, and a Christmas Day filled with food and presents and love. We saw my brother and his family on Boxing Day, and I also made several trips to London to visit my dad, who was ill in hospital for five weeks (fortunately he’s recovered and home now) and managed coffee with a couple of friends.  I spent New Year’s Eve with my daughter Katie and her boyfriend, a chilled evening of TV and wine that turned into a bit of a crazy party after midnight (highlights include doing aquarobics in the living room, and fun and games with some Jack and Michael Whitehall masks!!), followed by a relaxed New Year’s Day and yummy roast dinner. On the 2nd Jan, Katie took me to London for a joint Christmas and birthday present – a surprise day out that turned out to be not one but TWO West End shows – School of Rock and Matilda – which were both amazing. 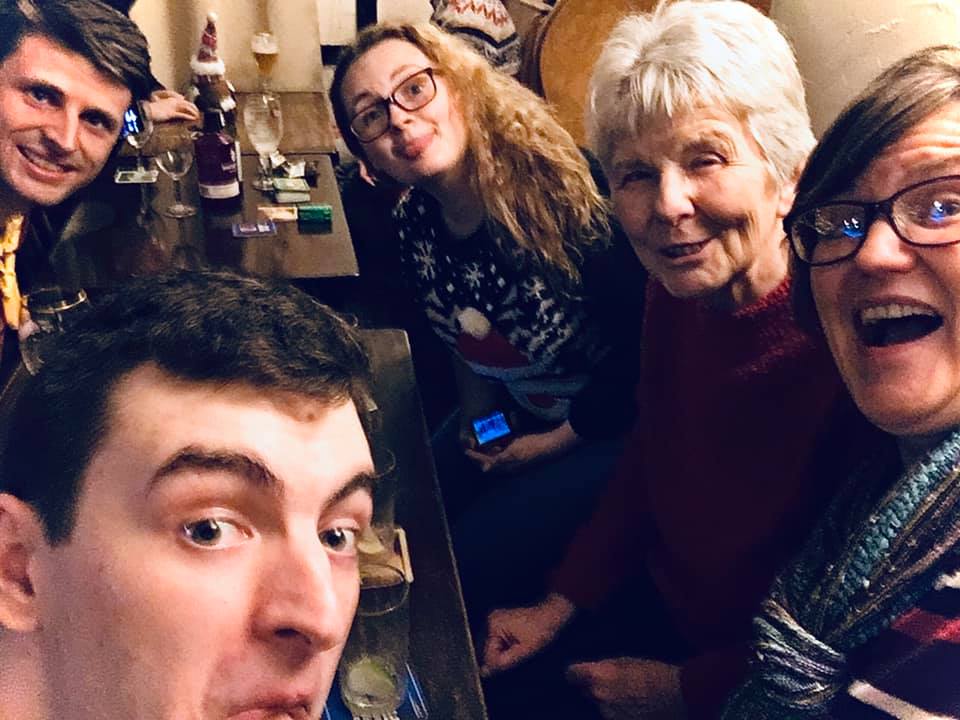 And then on the 4th I departed for Gatwick area and my flight to Porto, where I was booked into a hostel overnight, the same one I stayed at on the way out. Bless them, when I arrived the staff recognised me, remembered I’d mentioned I was coming back on my birthday, and presented me with a glass of Port and a chocolate muffin to celebrate!! Then next day (my birthday) I took the train to Coimbra and drove to my friends’ farm, where I collected a very excitable Pickle and a decidedly nonplussed Bobcat, ate a tasty roast dinner and came home.

I arrived back full of optimism and enthusiasm and big plans. Last year I’d been in Portugal for an extended holiday, but 2020 was the year when I’d start to properly LIVE here. I was going to have a life full of JOY, I was going to blossom and BLOOM and really make the most of this amazing opportunity. I had a shiny new journal that I wrote several goals in, and I was resolute that this was going to be my year.

And then … I don’t know really. Everything felt a bit flat. The house felt cold and unloved, the scenery bleak and grey. The internet connection, which had been performing reasonably well before I went away, was crawling on its knees, if I could get a connection at all. The weather was pants. The minor petrol leak in my car became a major one, and I ended up putting 110 euros in it in the first 8 days just to get to the shops and back, more or less. I had a falling out with a friend. The small amount of money I’d come back with (because the UK is SO expensive and I’d spent a shedload of money on nothing while I was there) ran out very quickly, and I had no work coming in. And despite seeing friends at Portuguese class, and talking to my family regularly, and going out for coffee with new friends, I felt very, very lonely, and very, very alone. This village, which had been a source of much-wanted solitude for so many months, suddenly felt like a prison.

Which is why, nine days after I arrived back in Portugal, I spent a solid 12 hours crying for no reason at all.

It was one of the most emotionally painful days I have ever experienced. I’ve done crying before, sure – but for a reason. I could see no real reason for my abject misery on this occasion, but when I thought about that, it just made me cry all the more! I had a text conversation with my best friend where I weeped and wailed and moaned and basically wallowed in a pool of self-pity, and it wasn’t until I talked to my mum later that I stopped crying. It was a conversation I really didn’t want to have because I didn’t want her to know how dreadful I felt but I realised I still need my mummy, even at the grand old age of 49!

The next day I felt almost human and since then I’ve been better, mostly. At least, I haven’t felt as awful as I did that Tuesday. The weather has been damp and dismal and that hasn’t helped – when I can get out in the sunshine it lifts my mood no end. I’ve realised that I really don’t want to be living in a deserted village any more. I don’t want to live on top of anyone – a house share wouldn’t work at all, because I need my time and space to myself – but I do need to be living in a village with other people around me, and that’s now what I’m trying to sort out. But with a dog and a cat, the insecurity of self-employed work and no money to my name it’s not the easiest thing in the world to organise! But I’m working on it.

I’ve had some lovely walks with Pickle and BobCat – in fact, Pickle is probably what’s kept me going these last few weeks. She seems to sense when I’m feeling low and keeps close to me; she’s also endlessly entertaining. One day we were up walking on a different track when I heard a weird squeaking noise and saw a wild pig – javoli – come flying out of the trees, closely followed by Pickle! They shot off one side of the mountain, squealing and barking all the way, while Bob shot off in the other direction and I was left there for half an hour calling and calling for my animals to come back. Eventually Pickle returned and we walked home, calling for Bob all the way. As we’d been quite a long way from home, and on an unfamiliar path, I was convinced we’d never see him again – so I was over the moon when he strolled back into the house as soon as we arrived back, none the worse for the adventure! The next day we encountered a pig again, though Pickle seemed far less bothered this time, thank goodness. Another day, we watched four deer grazing along the mountain, and on another walk I came across a complete antler (well, complete until Pickle got her teeth into it!). 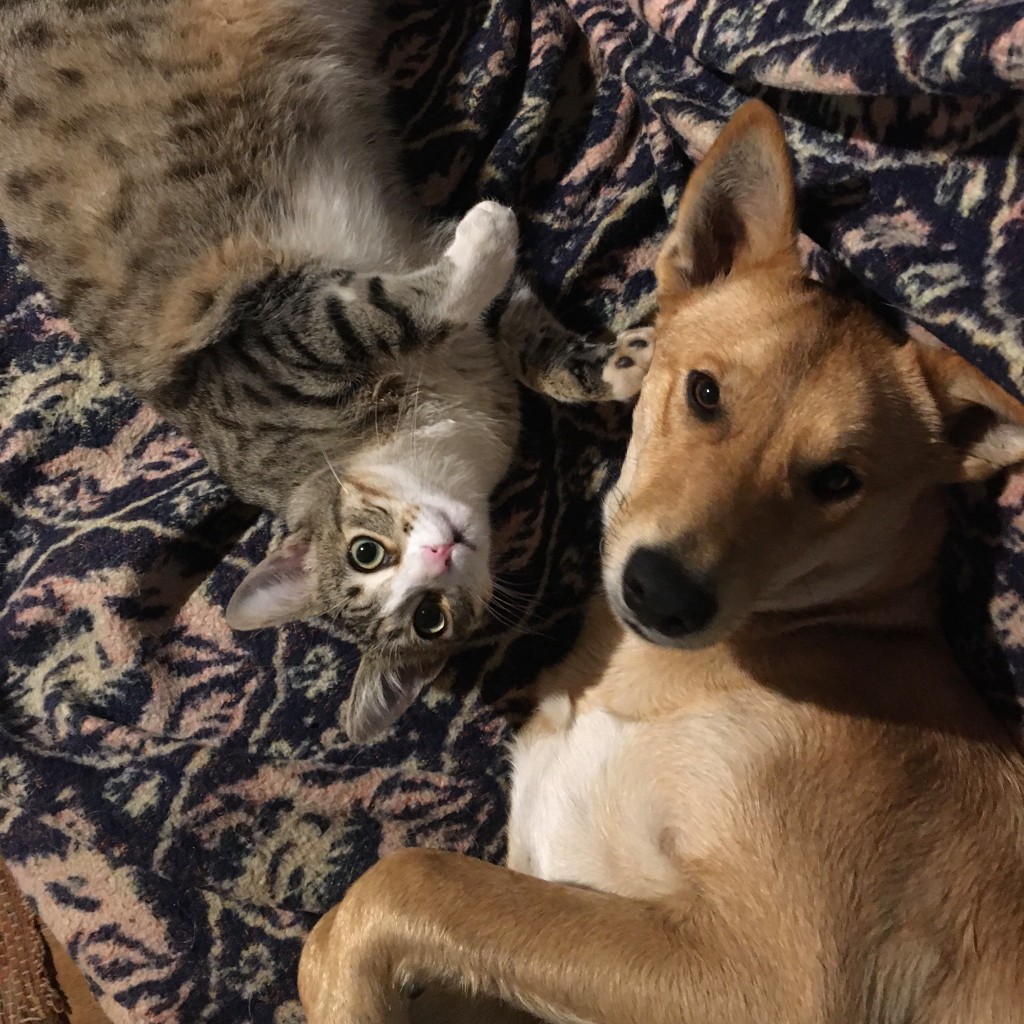 One of my goals this year is to make new friends and build a community around me, and I’ve made some headway with that this month. I bought a printer from an English guy near Pedrogao and we have kept in touch since; in fact, I may well go round to watch the new Star Wars film with him this weekend. (I saw it in the cinema with my son at Christmas, but it was fab so I don’t mind watching it again.) I had coffee with two lovely ladies from Serta, and lunch with an American gent who is something of a historian and gave me lots of insight into interesting places to visit, including some petroglyphs not ten minutes’ drive from home. I spent a mostly enjoyable weekend in a gorgeous, lively village in the Serra De Estrela national park, attending their sausage and wine festa (celebrating 81 years since a name change from Pig Village to Lush Village, haha!).  And I discovered the local swimming baths, where you can swim AND have a hot shower for the princely sum of 1 euro and 10 cents. Bargain!

For now, I’m putting my mini breakdown down to post Christmas/birthday/holiday/family blues. And hormones. At 49, I’m quite possibly perimenopausal, with all the joy that can bring. However, I’m also aware that I’m always hovering on the edge of another spell of depression, and I need to keep a close eye on myself to make sure I don’t fall over the edge and into the pit. I don’t want to go back on medication – and don’t know what else a doctor here might offer, so that’s not something I want to do right now. I might, however, investigate some sort of natural supplement such as St John’s Wort – please do leave a comment if you have any recommendations for natural remedies to try. Otherwise, I’m going to keep as busy as I can, make time for social events, eat well, stay away from alcohol, get plenty of fresh air and exercise and see how things go.