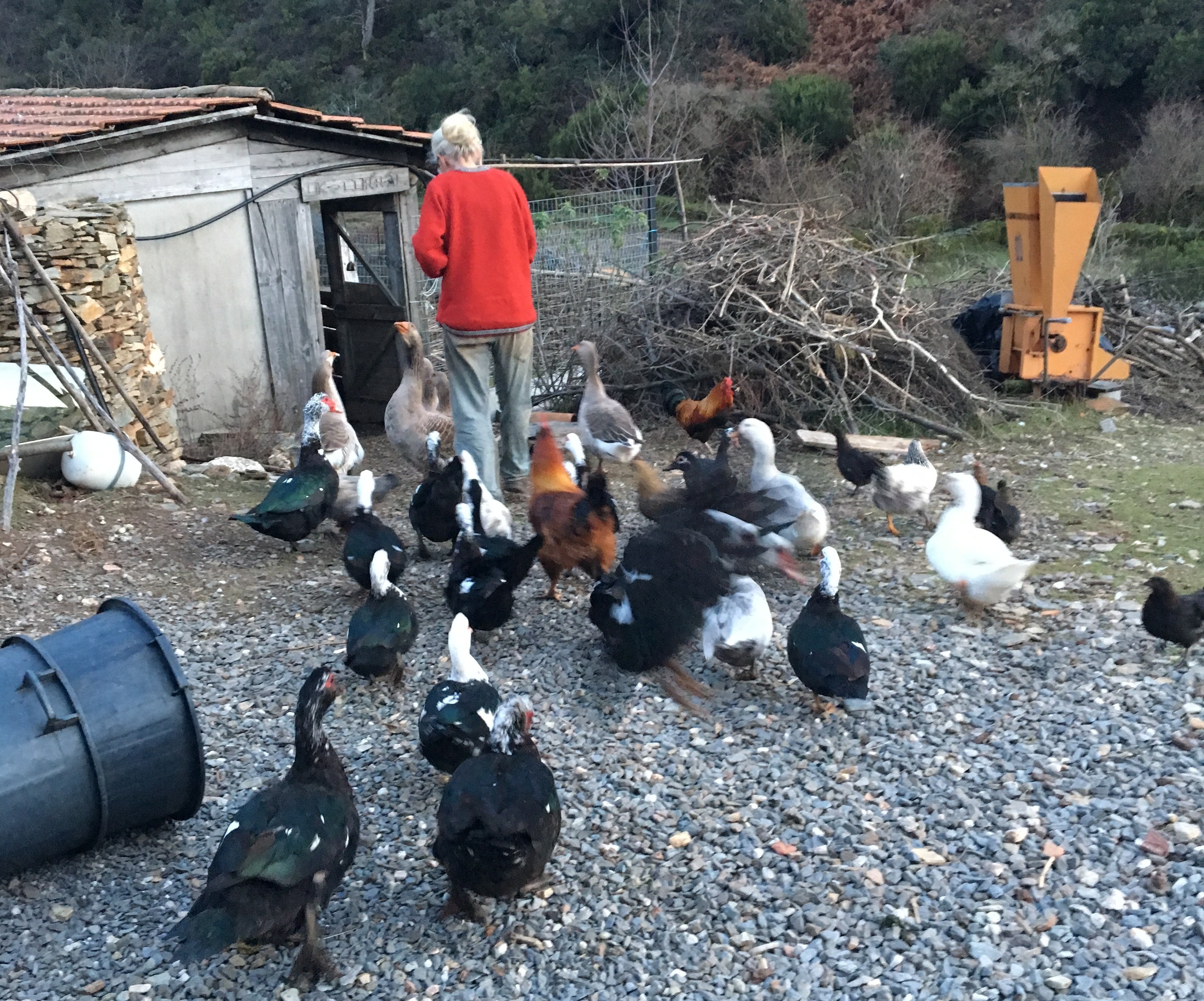 Being a Londoner through and through, I never had much to do with animals as a kid, not least farm animals. In fact, to me farmers were characters out of Topsy and Tim books, so you can imagine my surprise when I moved to rural Oxfordshire in 2005 and met someone who was an actual pig farmer!! I’ve always been a bit wary of ‘wild’ animals (i.e. anything that’s not a cat, budgie, hamster or bearded dragon) so although I’ve been here before on holiday and have been involved with feeding time etc., I wasn’t sure how I would take to animal care becoming part of my daily routine.

The answer is: I love it! Every day I’m involved with feeding the pigs (there are 29 at the moment!), chasing birds and sheep to bed, walking the goats, feeding the rabbit etc. I even have the early signs of becoming a full-on farm girl – callouses on my hands, suntanned face and arms, walking boots welded to my feet. So given that the animals have become such a large part of my life, I thought I’d write a few blogs posts introducing you to some of my favourites. This one is all about the birds. 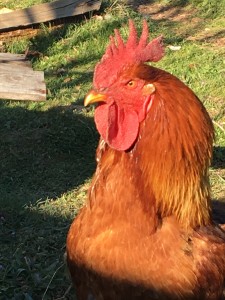 There are about 15 chickens here, a mixture of bantams, hens and cocks. Cocky is the largest of the cocks by some distance – he stands a good two feet tall and has beautiful fiery orange plumage. I love it when he crows, a full on “Cock-a-doodle-dooo!” – that’s another of those things I used to believe only happened in children’s books. There are some smaller cocks who all also crow magnificently – except for one, who croaks out a rather pathetic “Cock-a-cock-aaaaaaa,” sounding rather like a 40-a day smoker!

Cocky has his harem of ladies and he is very protective of them and will defend them mercilessly from the other cocks. However, this is a recent development: there was a smaller, more dominant alpha male who used to boss Cocky around – but we ate him. Hence Cocky has now become Top Cock.

Cocky is quite a character. He loves mooching round in the sheep shed looking for food. Most mornings I let the sheep out and as I’m walking across the field, I hear thunderous footsteps behind me, and then a large shadow looms alongside me as Cocky comes hammering along the path to make sure he gets best pickings! After all, it’s the early bird that gets the worm…. 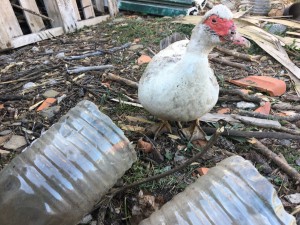 I mentioned Felicity in a previous post; she’s the duck I rescued after she fell into one of the pig enclosures and was duffed up by four hyperactive young pigs. She was traumatised by the experience and we weren’t sure if she was going to make it or would end up I the cooking pot. Fortunately, we discovered she was laying eggs, which was definitely a bit of a bonus, and I’m pleased to report that Felicity is doing very well!

Apparently, she’s always been quite a quiet duck, and since her accident she seems to keep herself to herself most of the time. She spends a lot of time sitting on the driveway or the grass alongside it or sheltering from the sun under the truck or a bench. However, I quite often find her round the sink area looking for water – there are some half-water bottles there that collect rain water, and I’ll often be doing the washing up when I hear a “tap-tap-tap” from the other side, and it’s Felicity drinking from the bottles.

I don’t know how tame she was before I had to rescue her, but she’s very happy for me to stroke her head, she’ll drink water from my hand and at the end of the day, when all the other ducks have raced to the shed in search of corn and she’s lagging behind, I’ll pick her up, tuck her under my arm and take her home! 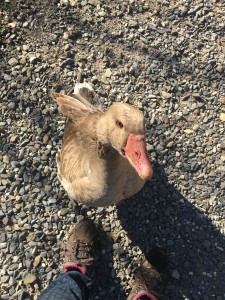 I have a bit of a love-hate relationship with the geese. There are six geese here – two males and four females, and the biggest male, Mr Goose, is super aggressive. I guess he is just defending his girls, but especially at the moment, when two of them are sitting on eggs, he is really vicious! Within the first few days of me being here he’d bitten my finger and drawn blood and I have lost count of the number of times he’s sneaked up behind me to take a chomp at the back of my leg. And it hurts! Perhaps the most painful time was when I was trying to tempt the sheep home with corn. He decided he wanted the corn and full on attacked me, gripping my kneecap in his beak and refusing to let go! It left me with a massive bruise. Sometimes I am able to stare at him menacingly and he backs off, but mostly I try and keep my distance.

The geese are by far the noisiest animals on the farm – yep, even an 800lb pig can’t compare for noise level! At least their ear-splitting honking gives me plenty of warning that they are around, so I can prepare myself for battle …

However, there is one goose who I have grown rather fond of. Squeak is one of the two sitting on eggs – she’s made a nest in a ruined building down a slope not far from the house and spends all her time in there. But when we get the corn out to feed the birds at bedtime or distract them from the pig food, she comes running up the hill, wings flapping, flat feet slapping on the ground, shouting “Squeak, squeak, don’t forget me, squeak squeak!” Yep, as her name suggests, Squeak doesn’t honk, she squeaks! She’s very friendly and will come right up to you and look at your enquiringly. Although she has nipped me once, it was only gentle, and I’m not scared of her at all.

We try to let her stay out at night so she can go back to her nest but sometimes she ends up in the duck shed – but she’s very good at letting you know by squeaking endlessly until you let her out. Then she squeaks thank you, and waddles back down the slope to her nest. What a dedicated mum!

UPDATE: Shortly after I published this post Squeak went missing. One day she was sitting on her nest in the ruin, the next she was gone. Disappeared without a trace. We assume a fox got her, but she was a big bird and there were no signs of a struggle or stray feathers. Very sad.