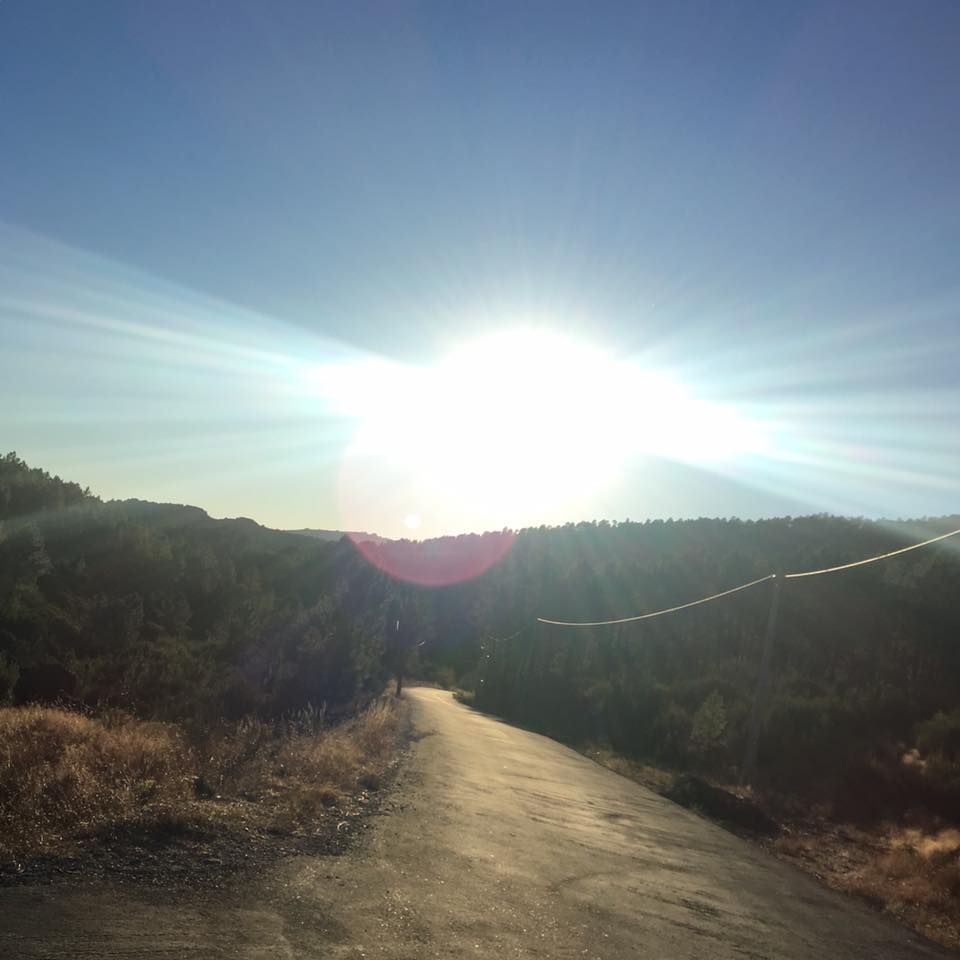 I’m about to embark on a midlife adventure – and I’d love you to come along for the ride!

I’ve always thought of myself as a quirky, unconventional, spontaneous person. Someone who’s not afraid to step out from the crowd and do her own thing.

But you know what? It’s not true.

Yes, I’ve maybe gone about life a tad unconventionally. I’ve certainly done things “the wrong way round” a lot of the time. But I’ve realised recently that I’ve always played it a bit safe really. Even as a teenager, when I lived in black PVC and eyeliner and was a bit of a rebel, I never did anything truly rebellious, like getting a piercing or dying my hair a crazy colour. I’ve been unconventional within the bounds of conventionality, if you know what I mean.

I’ve always wanted to travel. In fact, I had a couple of opportunities in my early twenties – a place as a mentor at Camp America, which I turned down because I’d just met a new man (d’oh!), and a chance to live and work in Corfu, which came to nothing when the friend I was joining out there came back to the UK unexpectedly. And I have been to some wonderful places – India, South Africa, Zambia, Egypt, Dallas, various bits of Europe – but never for more than a short holiday. I’ve always come home bursting with ideas to move abroad – Mum reminded me recently that after a week in Ibiza I was dead set on moving out there, Gozo seemed very appealing after a week there, and I would love to spend the UK winter on Egypt’s Red Sea coast in Dahab. But I’ve never gone through with it. Because really, I’m not that unconventional, I’m not that spontaneous and actually I’ve been pretty scared to step out from the crowd and do my own thing!

Until now. Because now … or on February 3rd 2019, to be precise – I am packing up my worldly goods and sailing over to rural central Portugal, via Santander, to start a new life. To begin a midlife adventure!

So how on earth did THAT happen?

My best friend moved to Portugal in 2005, first living in a small, partly derelict cottage, then buying a larger quinta (farmhouse) on 10 hectares of land – it’s called Casalinho e Escabelado and you can find out all about it here. Andrea and her partner are slowly renovating the house, keep animals (pigs, sheep, goats, chickens, ducks, geese and rabbits plus a menagerie of dogs and cats) and farm the land. I’ve visited them four times now. The first time, in 2008, was wonderful – it was August, the temperature was in the 30s, she was renting a house near the quinta at the time and it was all very relaxing and lovely. The second time was March 2014 and this was a very different experience. It was cold and wet, they’d moved into the farmhouse but it had no electricity, I was sleeping in a draughty caravan, the compost toilet was halfway up the mountain and I was miserable for the first six days!  But on the evening of my last day, the sun cast a golden glow across the valley, the only sounds were of birds and goats, and I had a sudden epiphany. This was what it was all about – this sense of getting in touch with nature, and away from the madness of the modern world. You can find out more about my epiphany here.

Three years later I spent a fortnight at Casalinho. Admittedly the weather was stunning but I knew what I was going to and this was an altogether different experience. I was instantly relaxed and something about the simple life my friend lives over there really appealed. I started dreaming of moving over there, perhaps staying on the farm, maybe renting her original cottage, spending my days writing and painting and reading, tending veg beds, walking goats.

From then on, I made a decision that at some point I would go to Portugal to live for a few months, just to do something different. Life ticked on in its usual conventional way and I was reasonably happy with my lot. But over the last year things have started to change – and I’ve finally taken a giant leap of faith and decided to make my dream a reality.

Not to put it too bluntly, 2018 has been shit. Utter shit. Without going into too much detail, I’ve lost three friends, two through absurdly early deaths and one through an absurdly stupid argument. I found and lost the love of my life. I made a stupid decision to change jobs and ended up being bullied by the MD and hating my life. I’ve had problems galore at home. My debts have spiralled to an alarming five figures.And one of our cats even decided to turn his back on us and leave home! I’m ending the year having fallen into a pit of depression that kept me in bed for days at a time and that I’m only now climbing out of.

There have been a few bright spots in this year though, and they have led me to the decision I made this week.

Firstly I spent a few days in Cornwall on my own back in June. I did quite a lot of socialising while I was there, but also a lot of walking and thinking and daydreaming, and I started to realise that I wasn’t happy with my life and things needed to change. I just wasn’t sure what.

Then followed a week in Portugal, staying with Andrea and her family again. It reminded me of just how much I appreciate the simple things – though I did miss my regular Sunday night bath! However, the once-weekly solar shower almost made up for it, and the visit reinforced my dream of moving over there for a while. Especially when Andrea offered me free bed and board!

Ideas started to formulate in my head and ultimately I ended up with three choices. Stay in Witney living my life much as it is now. Move to my beloved Cromer in Norfolk – my spiritual home, and the place I’ve always sworn I will end up. Or take a chance on packing my life away and starting a new one in Portugal.

I’ve been going over those ideas for weeks now. When I came back from Portugal, a move there seemed like the logical choice – until I came home and looked at all my stuff, and thought about my family and friends, and realised what a huge logistical nightmare it will be. Mum and I had booked a long weekend in Cromer and we had a wonderful time there, pootling round the town, walking on the cliffs and beach, and viewing a lovely basement flat that was just perfect. I was tempted ….. very tempted. But there was something holding me back – a little voice saying “Not yet. One day, but not yet.” And my thoughts were sent into even more of a maelstrom when we went out for a Chinese meal and I found this in my fortune cookie: 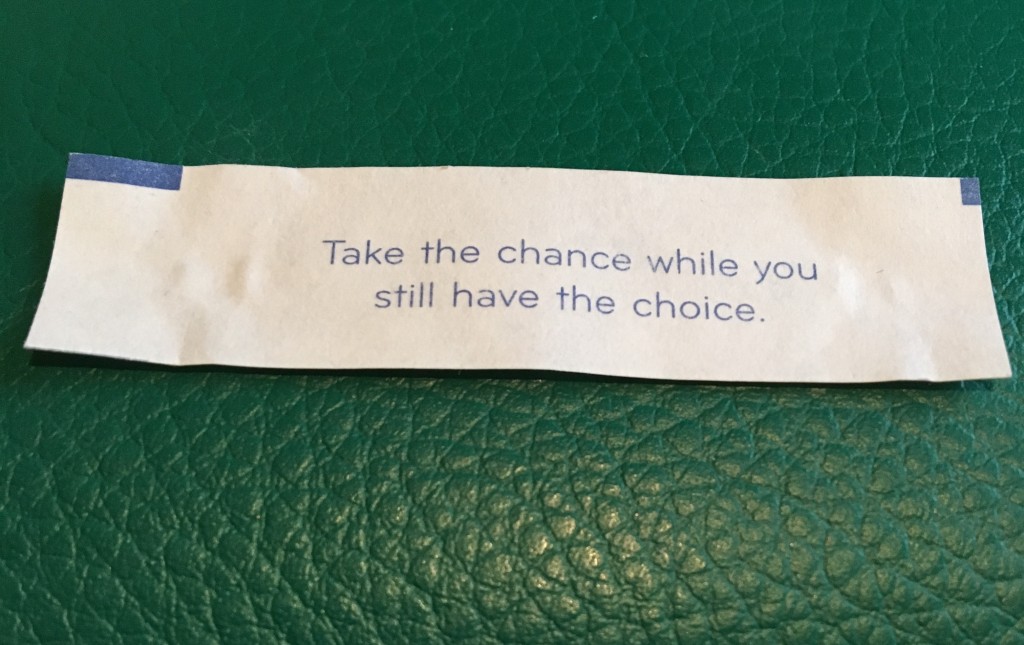 And then last week I had a session with Susie Rose of Breathe Rise Shine. Susie does all sorts of things, including transformative coaching. We talked through my options, and then she put me into a state of deep relaxation and invited me to explore each pathway and see what came up. After the session I rushed home full of excitement because I’d suddenly realised exactly what it was I wanted to do. I’d seen three doors, heard three messages …. I even painted them, just to keep the vision in mind. 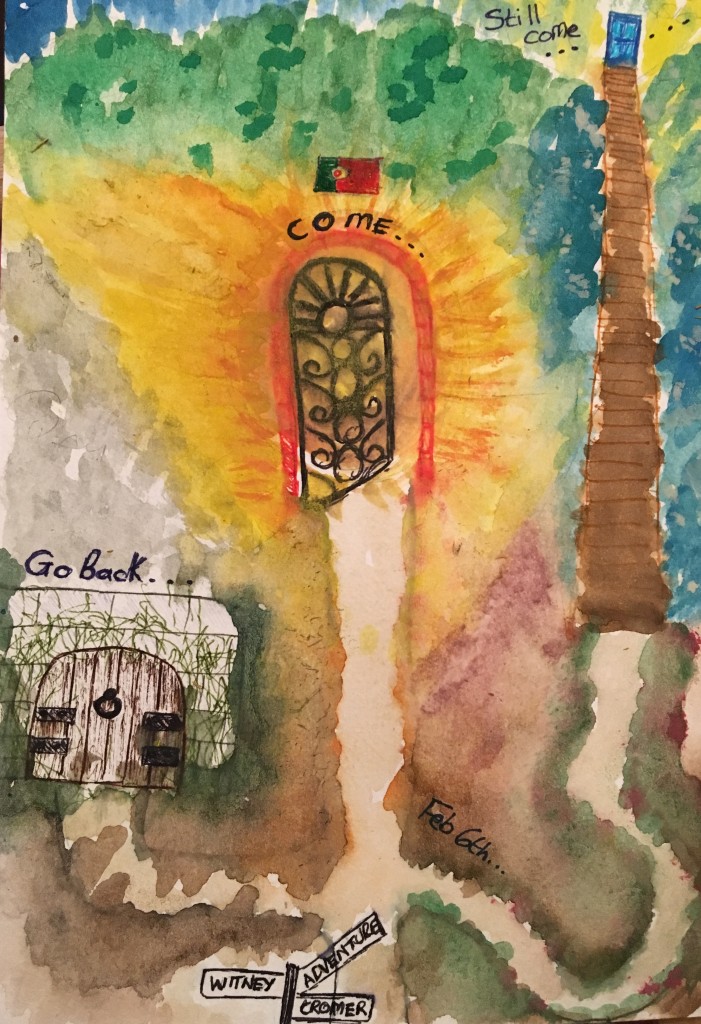 Out of curiosity I had a look at the ferry crossings from the UK to Santander – I want to take my car, so that’s the best option really. They’re quite limited in January and February, but there is a crossing on Feb 3rd from Portsmouth, which arrives in Spain on Feb 5th. Which means I’ll have a day of driving down Spain and Portugal, and I’ll wake up on the first day of my new life in Portugal on …. Wednesday 6th February. It’s almost as if it’s meant to be!

I decided to be spontaneous and impulsive and not at all like my usual self, and book the ferry. The next two months are going to be crazy. I have a whole house of stuff to put into storage or declutter, including a gazillion books. I have two cats (I fear the third has left home permanently) and a tank of tropical fish to rehome. Not to mention a lodger and a son. I’ll be living in a caravan and it’s cold in Portugal in February, so I need to stock up on thermal underwear and solar lighting and big baggy jumpers, but leave room for some summer dresses in case I’m still there in August. I need to check my car is roadworthy enough to manage the 400 mile drive on the continent, and big enough to fit all my stuff. I need to learn a few words of Portuguese so I don’t look like a complete idiot when I arrive. I need to let friends and family know, and say goodbye to so many lovely people.

I don’t know how my adventure in Portugal is going to turn out. I might love it and never come back. I might meet a fit Portuguese man and get married. I might become a lonely goatherd, living in a cottage in the mountains on my own, with only my goats and a stray cat for company. I might hate every minute of it and be on the next ferry home! But what I am planning to do is  keep a blog about my big midlife adventure and potentially turn it into a book – however it goes. So keep reading!

One thought on “My Midlife Adventure: How it began”