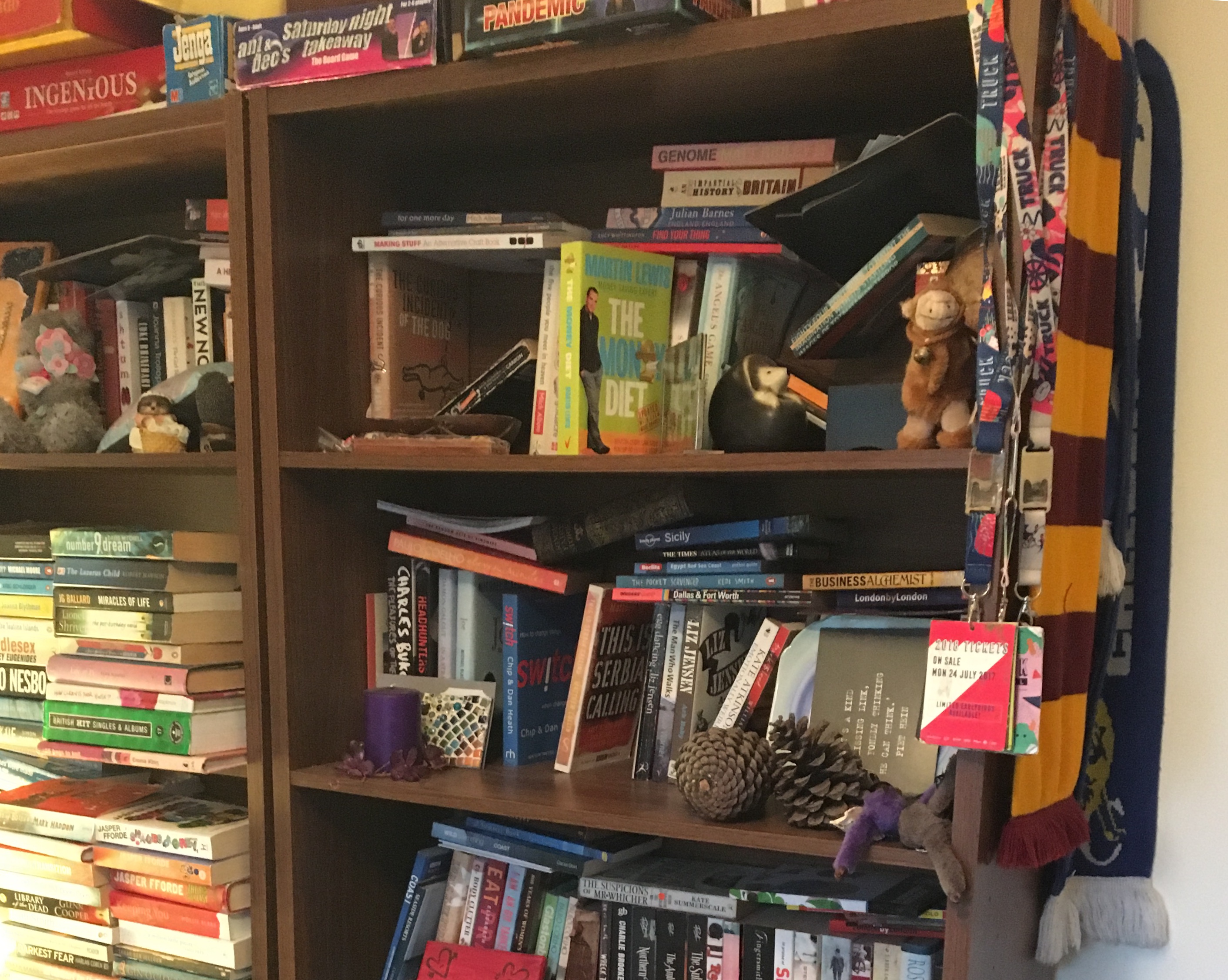 I admit it – I’m a hoarder. Especially of books, and old photos, and tacky ornaments, and bits of paper. Anything that reminds me of a lovely day out or holiday gets put in a box and never looked at again … but I can’t bear decluttering because, you know, I might need them one day, and if I don’t have the boarding pass to prove it, I didn’t fly there!

But that’s who I am. I’ve moved house six times in the last eighteen years, and have done what I thought was a good declutter every time – yet still have a house full of stuff. After all, I did bring 21 boxes of books with me last time, and there are boxes in the garage that have been in the garage of every house I’ve lived in since 2001. Every time I move I open them, decide I can’t possibly get rid of any of the contents, reseal them and move them to the next garage…

And that’s not been a problem, because I’ve always had somewhere to store all those things I’m not sure about. But this time it’s different. This time almost all of my worldly goods will going into storage. And storage costs money. So do I really want to be paying to store things I don’t really need?

But lovely though the idea is of getting rid of everything, I don’t want to return to the UK and have to start from scratch.  But how to get rid of things, that’s the question. How do I choose what stays and what goes? And that’s why I invited Lesley Beattie, Your Organisational Angel, round this week.

Lesley is an expert in mindful decluttering – I guess it’s something along the lines of the Marie Kondo school of thought, but not quite as extreme. I’d already made a good start, deciding I really didn’t need my CDs as I no longer own a CD player, decanting  my few DVDs into a wallet ready to take and watch on my laptop in Portugal, and making a start on books. I’d also decluttered the dreaded cupboard under the stairs and been shocked at how much rubbish was in there. But I was beginning to struggle and procrastinate.

Lesley started by giving me a few guidelines. The ones that stood out to me were:

She pointed out that I don’t have to keep something just because it was a gift, if it’s not useful or joy-bringing. And I also kept in mind something my mum said to me: “If you get rid of a book and then decide you want to read it, books still exist!”

We made a start in the kitchen – a room full of things I wasn’t particularly emotionally attached to. We went through it cupboard by cupboard, and it was surprising how much easier it was to make a decision with someone neutral with me. Did I really need four frying pans and two woks? Of course not – we pared them down to two and one. Is there any point in keeping the saucers with no cups, just because I used to use them as side plates? No, because I do have side plates now. Potato ricer or masher? I prefer the masher, so the ricer went. What about my grandma’s crystal tableware? I kept the bowl and snack tray, but got rid of the smaller one as it’s not nearly so pretty.

We separated everything into keep, charity, bin – and then moved things straight away to an appropriate place. I later bagged everything up as it was less tempting than seeing things and thinking “Maybe I will use it one day…” I was staggered by how much stuff I was keeping that I never use, or didn’t like!

Next we came upstairs and started on the bits and bobs in my bedroom. Most of them I kept, and had good reason for keeping, but I did let go of quite a few things that were either broken, or held no special memory for me and didn’t really make me smile either. This was starting to feel easy! Whenever I hesitated over something, Lesley asked me what I was thinking, and reminded me of the guidelines. Sometimes when I talked through my feelings I realised how irrational they were. For example, I love keeping tickets and programmes for events I’ve attended – but my thinking goes that I need to have the physical evidence to prove I was there, when in fact I have photos and memories that are far more valuable.

Finally we came into what’s laughingly known as my office – a tiny, clutter-filled space. Now I was getting into my decluttering stride, there was a box I wanted to tackle. It was full of bits and pieces that were special to me, and I’d avoided looking in it for months because I didn’t know what to do with everything. Or so I thought.

Turns out it was full of junk! Airline boarding passes, tacky ornaments, freebies I’d never used, old birthday cards, things I’d bought on the spur of the moment and never used, broken things I intended to mend one day …. Out of the whole box about half a dozen things stayed, with the rest going in a box for the charity shop or straight in the bin! I’d been so worried about sorting through this box but with my new guidelines in place, it was a doddle! 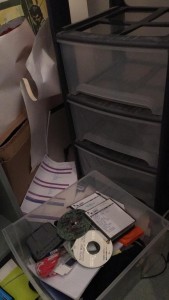 After that my two hours with Lesley was up, but next day I tackled another part of the office on my own – the drawers. Every time I’ve moved I’ve had a cursory sort through these and left almost everything in there. This time I have reduced four full drawers of stuff to half a drawer of useful things – and I may well pare that down further!

I’d definitely recommend working with Lesley if you need to declutter, downsize or just be a bit more organised in the home. It was a really good experience – she was totally non-judgemental, and really helped me to make rational decisions while understanding totally that there are some things I can never let go of.

(Interestingly, one of those things was a metal and glass photo frame with a picture of my grandma in it. She suggested just keeping the photo and getting rid of the frame, but it belonged to my grandma and I felt I needed to keep it. Today I went to wrap and pack it and the glass snapped in half ….! So it’s in the bin now, and I’ve put the photos in a memory box!)

I’ve found the experience of letting go of so much junk cathartic and a little bit addictive – can’t wait to make a start on the garage!

I wish I’d taken some before and after photos but these will have to do. The photo below is just some of the bags lined up in the hall ready to go to a charity shop! 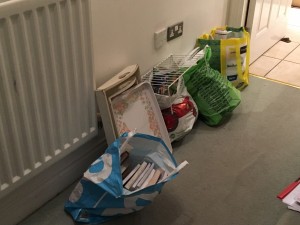