This entry is prompt #17 of The Book of Me, Written by You project

This week’s prompt is – Toys & Games

I can’t remember the first toy I had … I would imagine it was probably something fluffy, when I was a baby. The first toy I really remember was a big fabric doll of Florence from The Magic Roundabout. My nanna made it, and she also made my brother a Brian the Snail. Florence had a massive head and long floppy legs and at some point I’ll post a picture of her.

Another floppy-legged toy I had was Fred, a knitted mouse my grandma made me. The original Fred is long gone but somewhere we have Fred mk II, which Grandma made for Katie. Again, picture to follow when I find him! 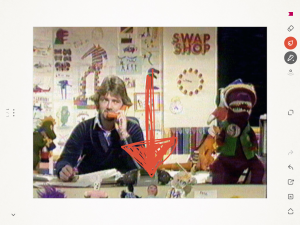 Grandma also knitted me a smaller doll, who was called Jack. Jack had a very exciting life. My dad worked for the BBC and was often on the crew for Swap Shop. One day Dad took Jack to work and he spent some weeks on the front of the Swap Shop desk – till he was kidnapped in mysterious circumstances! Over the next few weeks Dad received anonymous ransom notes in his pigeonhole; he was also sent photos of Jack in precarious situations (tied to an ironing board, tied to railway tracks, that kind of thing). There was even a ransom demand in the message board part of the programme one morning. I can’t remember what the ransom actually was, but Jack was returned eventually, unharmed. However, he has since disappeared … I hope he is off somewhere having more adventures! You can just about see the top of Jack in the photo, under the big red arrow.

I’ve always been a board game fan and my brother and I used to play a lot as kids – Smuggle, Game of Life, Kerplunk and Spider & Fly were favourites, and we also used to play Monopoly, Cluedo, Risk etc. One of my favourite games was Totopoly, a horse racing game. We also had some mad game called Blast Off which I think was all about trying to get a space ship to the moon! I still enjoy board games, though the rest of the family don’t share my enthusiasm – except at New Year, when we usually get drunk and play Ant and Dec’s Saturday Night Takeaway and Cranium!

The toy I would have loved to inherit was a rocking Mickey Mouse. It belonged to my dad and would probably have failed every health and safety test nowadays – I imagine the paint was laced with lead and the rocking mechanism could probably amputate small fingers. I would love to have it, but I think it was probably sold when my nanna moved from Cambridge to Somerset. I wonder where it is now. 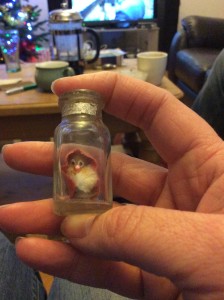 I’ve moved house so many times that all my toys have either been lost or given away. However, I do have one that has stayed with me wherever I’ve been. For some reason it feels very special to me, though I don’t know why. It’s a man in a bottle, and I got it in my Christmas stocking when I was a little girl. It’s sat on many a kitchen windowsill and in fact I just took it from the kitchen window sill now to photograph it! One day I will pass it on to my grandchildren and hope they love him (for whatever odd reason) as much as I do!