This entry is prompt #19 of The Book of Me, Written by You project

This week’s prompt is – Who Do You Miss?

Having just gone through the Festive season our thoughts turn to those not with us.

Ok this is a hard one …. Of course there are lots of people I miss and lots of people I would like to have shared Christmas with – Nanna and Grandad Pussies, Grandma and Grandad Fred (Fred hasn’t gone physically but as he has Alzheimer’s he is no longer with us mentally) mainly, and also Uncle Mervyn. I’ve been lucky in that the majority of deaths in the family have been to people in their later years, and fortunately I haven’t yet lost any close friends.

However, of course there was one person missing this year who almost definitely wouldn’t have shared Christmas with us anyway, but who was missed in all sorts of strange ways – Ian. My children’s father.

I met Ian back in 1992 in Hounslow, west London. I was on the rebound from a brief relationship with the love of my life, and feeling pretty lonely. Ian drank in the same pub as me; he worked at a yard over the road, delivering coal. In fact his nickname in there was Coalman Ian, and he used to come in after work black with coal dust. He was a bit of a joker, never took anything seriously. In my fragile state there was something attractive about this man, he made me laugh, and when he invited me to a nearby fair and then squealed like a baby on the umbrella ride I fell for him. I’d recently moved to a new room in a shared house and I didn’t like it very much. I quickly began spending nights at Ian’s flat and after a few short weeks I moved in.

My parents, especially my mother, disapproved from the start. Ian wasn’t “one of us” – he was not well educated, and while he wasn’t stupid he wasn’t intellectually my equivalent, or so the family thought. I think no one else could see the attraction, which probably made me all the more determined to make things work out!

Ian had two children by two different mothers (or so he thought at the time – it turned out one wasn’t his, but that’s another story). We used to see the boys at weekends and I loved being step mum to the youngest, who often stayed overnight. During the week we’d visit friends or go to the pub; on the surface everything appeared to be going well but I was actually hiding a dark secret. Ian had a very short fuse and a terrible temper and when he lost it, he really lost it, often lashing out at me in the process. I won’t go into details here but I was often bruised and battered, and there was always an apologetic bunch of red roses waiting for me a few days later. The relationship was very controlling; Ian didn’t like the fact that I’d had a past, had previous boyfriends, had a mind of my own so I started to block things out. It was easier to forget who I was than risk another row. I gave up work because Ian was suspicious about me working with other men; I gave up swimming because he didn’t like that other men could see my legs. For about 12 months things were very difficult – and then I found I was pregnant.

I actually had really wanted a baby. I felt that I was never going to be able to escape the situation so I might as well make the best of it. I told Ian that if he ever touched me again I would leave and take the baby with me … And to his credit the violence stopped.

For the next few years things were okay, and sometimes even good. Katie was born in 1994, we moved to Farnborough, Hants in 1995 and Dan came along in 1997. Ian had started his own courier business; I did a number of part time jobs, including child minding and office cleaning. We had a fair few friends and for the most part we got on well together. There were still some horrendous rows but these were few and far between. However, I was aware that while things were settled I wasn’t happy, and gradually my memories of the past began to come back. As I grew more indignant about what I’d put up with and how my life had been affected, the rows increased and eventually in 2001, having found the strength to tell a couple of friends and my mum, I moved out with the children.

Life as a single parent was difficult but we made our new home a happy one. I stayed in contact with Ian and the children saw him every Saturday, and stayed over every other weekend. Things weren’t ideal – he rarely took the children out or supported them financially – but I felt safer and was able to create a new life for myself, and the children were happy. I guess the only person who wasn’t happy was Ian.

We moved house, to Oxfordshire, in 1995 when I foolishly met someone and got married. (We moved out three years later.) The distance meant the Saturday visits stopped, though the children still stayed with Ian every other weekend. Gradually, however, they were getting more and more disheartened because their dad rarely made any effort to entertain them: their weekends involved sitting in a room with the curtains closed, watching him play on the Playstation. Katie especially wanted to be doing other things – hanging out with friends, having a Saturday job, normal teenage stuff. Then in April 2011 we had a huge row over a promised visit to grandparents that hadn’t happened. Ian threatened me, the children heard it and they chose not to visit him again. It was their decision, and I supported them in it. I hoped he would apologise but nothing was forthcoming. Dan saw him a couple of times later that year but he missed Katie’s birthday, missed Christmas, only spoke to Katie on Xmas Day because she phoned him. The following May was her 18th birthday and he missed it entirely, missed Dan’s 15th, missed Christmas, missed Katie passing A levels and going to university, ignored her emails to tell him all about it. The children decided that he obviously didn’t care so they tried to forget they had a dad. To all intents and purposes he had pulled himself out of their lives …

Until last May, when I received a Facebook message from one of his friends asking me to call him. Ian had had a stroke and was in hospital, very poorly. Of course the children wanted to see him, so we went to visit – his mother, who I spoke to for the first time in 12 years, told me not to visit him as it would be too upsetting for him. The children stayed for three hours and were shocked by his appearance: he’d always been a chunky man but was thin, emaciated almost. Katie spoke to him on the phone a few times and on Fathers Day we went to visit him again, in a smaller hospital where he would receive rehabilitation. This time he invited me up and for a few hours we sat together as a family, for the first time in years. It was actually a really lovely afternoon. He was doing much better, his sense of humour had reappeared and we all enjoyed the time spent together. It felt like some bridges were rebuilt, both between the children and their father, and between Ian and me. I didn’t know what the future would hold, but I felt positive that the relationships would be better all round.

And then he died. A few weeks later we found out, quite by accident, that he had been moved and was in intensive care; he died the next day, of a perforated bowel, peritonitis, gall bladder necrosis. He must have been in the most unimaginable pain. However I may have felt about him, I wouldn’t have wished that on him.

The six months since his death have been difficult for us all. Dan, in his typical Aspergers way of thinking, pretty much said “Oh well, dad’s dead. Nothing I can do about it, move on.” I don’t know if grief will catch up with him later. Katie has found it much more difficult. She has been openly grieving for her father but I think there’s also an element of guilt there – that perhaps she feels if they hadn’t abandoned him things would be difficult. She – at the age of 19 – was appointed administrator of his estate – there was no will – and we have had to clear out his house and sort out his affairs. The house was in a dreadful state, signs of hoarding and neglect everywhere. I think it’s safe to say he was suffering some sort of mental health issues, depression at the very least.

While his funeral was a small affair there were plenty of friends there – people he had lost touch with or fallen out with in his lifetime, who still cared enough to show their respects. We all talked about how, despite his temper and his issues, there was a good side to him too. He was funny, generous and loving, even if he had a strange way of showing it at times. In some ways I still feel angry for the way he treated me and the children over the years – there are things that happened I will never forget and I still find hard to forgive. But I also feel desperately sad for the waste of his life. I feel desperately sad that he won’t be there to see his children grow up and embrace adult life. He won’t be there when they graduate, or marry, or have our grandchildren. And while there were times when I wished him out of our lives, now he actually is I find myself wanting to pick up the phone, wanting to tell him what the kids are up to, wanting to involve him in their lives. Ian …. It pains me to say it, but I miss you, you old bugger. 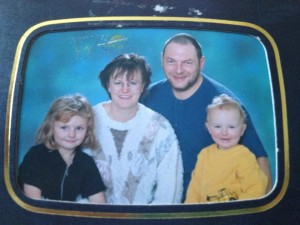