This entry is prompt #18 of The Book of Me, Written by You project

This week’s prompt is – First Present or Gift

Can you remember it?

Who bought it for you?

Do you still have it?

Pictures or a description

For some reason I had a feeling that the first gift I ever received was my Bunnikins breakfast set – and when I asked my mum about it she said yes, it probably was, because it was given to her by someone she worked with when she went on maternity leave! Originally there was a plate, bowl and mug, but it looks like the mug has got broken at some point. I still have in my possession (in a box in the garage somewhere) the bowl and plate and when I get a chance to sort through all the boxes I’ll add a photo. In the meantime the picture on the right will give you a fair idea of what they look like.

Other special gifts include: 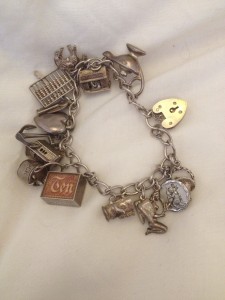 My silver charm bracelet. This belonged to my grandma but I don’t know where she got it – perhaps it was a present from her husband? I’ve never worn it – it’s not really my kind of thing, it’s not very practical and would doubtless rattle and catch on things and generally get in the way – but it’s probably one of my most treasured possessions. There are some really quirky charms on it – a blacksmith’s forge with a small lever you turn to make the blacksmith hit his hammer on the anvil; a garage that opens to reveal a tiny car inside; a glass-fronted box with a ten shilling note in it and the words “in emergency break glass” on the back; a paint pot and brush and so on. I’ve added a small basket of flowers that I was given as a child, and before I pass it on to my daughter (or perhaps my grand-daughter?) I’ll add one or two more charms. I’m just reluctant to pass it on at all right now as I love it so much!

I also had a golden cross that my grandma gave me. She wasn’t particularly religious so I don’t know why she had it, and I certainly am not! I don’t think I ever wore it and I have now passed it on to Katie, who wears it quite regularly (and she’s not religious either!)

Steve has recently given me a diamond ring – not an engagement ring, I hasten to add (I wish!!) – which I love and treasure. It’s Victorian, 18 carat gold with a platinum mounting and seven diamonds forming a flower. It’s very special to me.

Of course my children are experts at giving me special gifts – or rather, Katie is; Dan just gets to have his name on the gift tag! One of the best was a photo slideshow Katie put together for me for Christmas 2008. We had had a really difficult year and the photos and captions she used made me cry as I watched it on Xmas morning. I have added it to YouTube as an unlisted video and I watch it now and then, when I’m feeling a bit low, and it always makes me smile (and cry a little!). The following year she made me a photobook which brought back lots of lovely memories and again, it’s something very special to me. I also have a couple of teddies the children have given me on Mother’s Days past and of course I wouldn’t part with them! 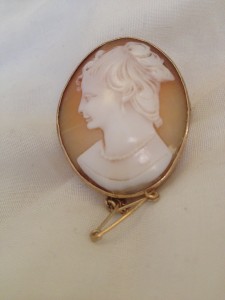 However, perhaps my most treasured possession of all is “hat and beads” – a small cameo brooch that belonged to my nanna. I believe this was a present to my nanna from my grandad and I can’t remember her ever not wearing it. The picture depicts a lady with her hair up in some sort of bun and wearing a necklace and when I was very small I used to call it “hat and beads” and the name stuck. My nanna came to my (ill-fated) wedding in 2005 – she was nearly 88 at the time – and was wearing her brooch. “Hat and beads, dear,” she said to me with a smile and a wink, “hat and beads.” Sadly my nanna died in 2012 aged 93 and my aunt, knowing there was only one thing I would like to have to remember Nanna by, gave me Hat and Beads. Again it’s not something I would be likely to wear but I will never part with it, and sometimes I get it out and reminisce.