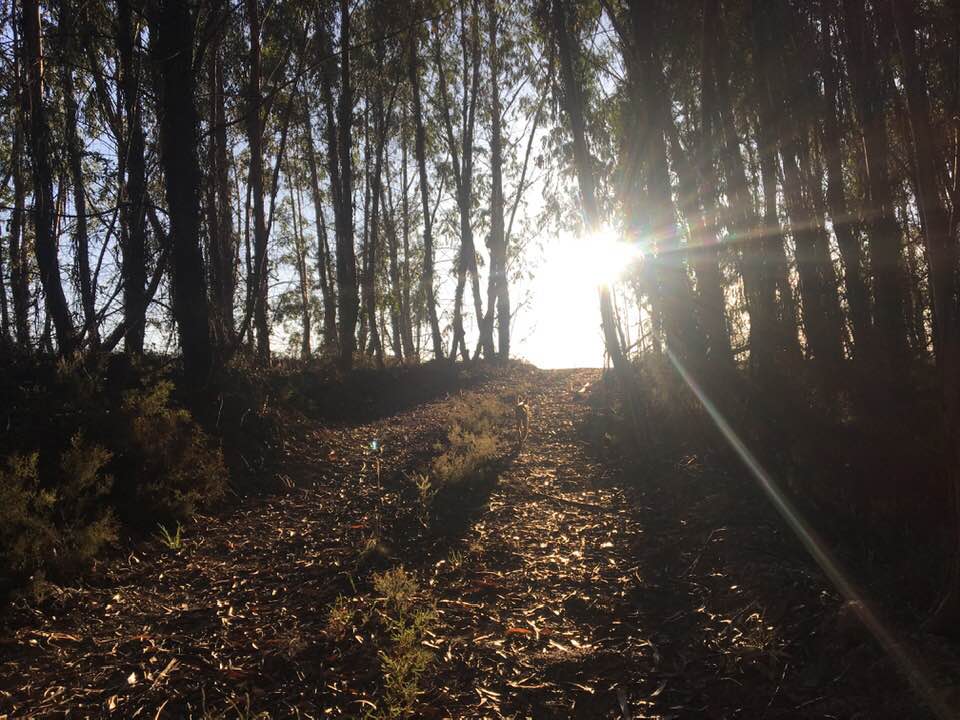 I struggled to know what to write about in this blog post because my life has become so simple and peaceful – and probably very boring to anyone observing from the outside! It’s lovely, don’t get me wrong – I wouldn’t change it for anything. But when I was living on the farm there was always some interesting animal-related anecdote to talk about, and now my days just roll one into another without any major excitement or conflict.

This last week I’ve tried – but not quite managed – to get out of my seemingly permanent “holiday mode” and into something resembling a more productive routine. Most days I’ve got up and done some yoga – I’ve been noticing some pain in my hips lately and the yoga is definitely helping. Most days I’ve also done a little writing – I’m aiming for a very modest target of 500 words a day but haven’t quite managed that! I’m working on two books – one is a guide to writing non-fiction books, and the other is an erotic novel. My writing muse seems to have left me though and it’s feeling like hard work. I’ve been making a concerted effort to learn a bit more of the Portuguese language and can now ask for uma mesa para dois, por favor … go me! Proof Fairy-wise, things have been very quiet over the summer, but I have had a couple of bits of proofreading and finally managed to hook my laptop up to my phone to use the 4G, so was able to do that at home rather than venturing into town to use the free Wi-Fi. I have another piece of work to do but that needs a better internet connection, so will require a trip out. I’ve done some zentangling (a ridiculous word for a specific style of doodling), some crocheting, and I’ve read, a lot – three magazines on Readly, three crime novels and a book on dog communication this week alone! I’ve also slept a fair bit – I had an ear infection a fortnight ago and felt very tired as a result. Antibiotics seemed to sort it out, but I’ve finished them now and my ear is once again feeling blocked and I’m a bit lethargic. That might have more to do with the weather though: it’s been mid 30s all week.

Talking of the ear infection, it was my first encounter with the Portuguese medical system, which was … hmm … interesting. I hadn’t got around to registering with a doctor but was able to go to the local center de saude, which offers 24-hour emergency medical care. I showed my passport and EHIC card and had to pay €4,50 for an emergency consultation, which seemed reasonable, and then after a short wait I saw something like a triage nurse, who for some reason assumed I lived on a farm and seemed only concerned about when my last tetanus injection was! She kept asking for my inoculation certificate, which isn’t something we generally have in the UK – I will give my UK doctor a call though to find out when I last had a jab. Then I saw Dr Olga, who spoke quite good English but spent the entire appointment lecturing me on how I should be able to speak fluent Portuguese by now! I was feeling quite ill, achy and feverish, and while what she said made good sense, I didn’t really think it was the time or place to be telling me off. Eventually she gave me a prescription for antibiotics and paracetamol, and recommended I sign up with the doctors’ surgery, which is in the same building – which I did before I left. I’m now under Dr Soares, who apparently speaks English and is lovely. We will see!

I’ve also listened to quite a lot of radio – a combination of the local Comercial music station, some interesting podcasts (my current favourite is “I Made My Girlfriend Watch Wrestling”) and James O’Brien on LBC, when I get enough 4G to stream it. Means I’ve been able to follow this week’s farcical events in Parliament with a mixture of shock, horror, amusement and utter bewilderment. Boris Johnson has proved himself to be totally out of his depth, Rees-Mogg has no respect for anything and our previously admired political system is looking more and more like a tinpot dictatorship. We must be the laughing stock of the world – I know the few Portuguese people I’ve spoken to about it are shocked at how poorly everything is being handled. I keep hoping Brexit will all turn out to be an elaborate hoax; I’m so proud that we Europeans have the freedom of movement that means I can come and live here so easily, and it’s really frustrating not knowing how either a deal or no deal Brexit will affect that; I also fear for the implications it might have on my family back in the UK in terms of travel, food, health care etc. Looks like it might all be delayed yet again, which will give me more time to sort out a Portuguese driving licence (I need to exchange my UK licence before Brexit to ensure I don’t have to take the Portuguese driving test, but to exchange it I need to have a medical, which costs money I don’t currently have.) I’m also a bit confused about how my medical care here in Portugal will be affected after Brexit – I’m going to an info session by the British Consulate next week, so I may be able to find out. 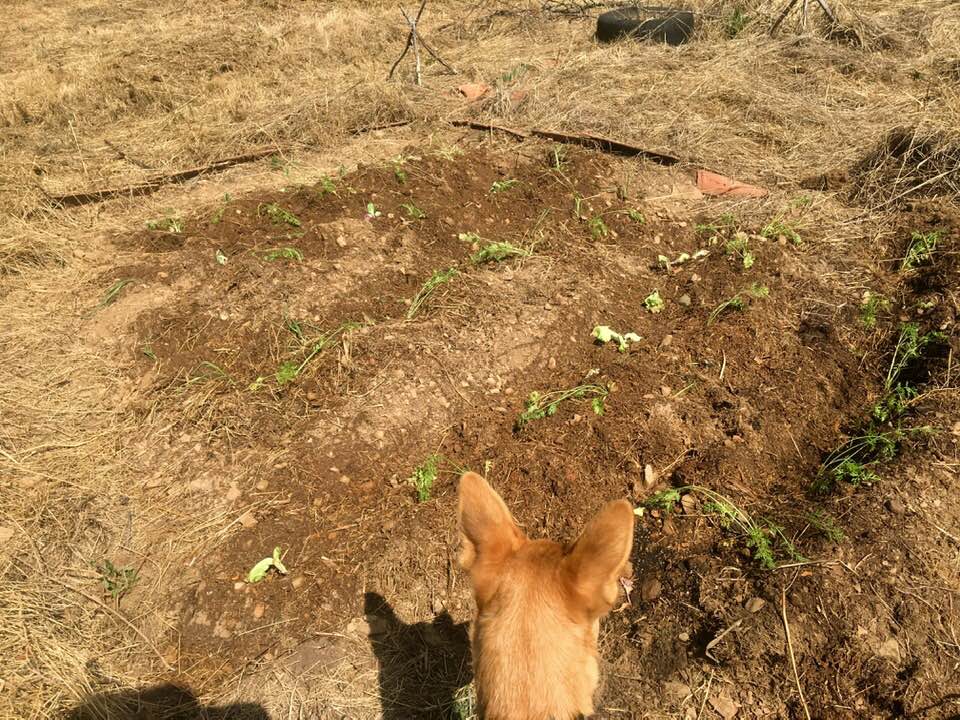 Monday, I went to the market in Pedrogao Grande and spent a whopping three and a half euros on plug plants for my rather sad-looking vegetable plot. Spent the afternoon planting, only to have Pickle dig up most of the lettuces the next morning. I’ve lost most of the veg to the heat / lack of water – I’m terrified of running up a huge bill, and even though it’s only a small plot I don’t produce enough “grey water”. There are still a few cabbages, carrots and leeks that are alive, so we’ll see what happens. A friend suggested I do pot planting rather than plot planting and maybe she’s right … easier to maintain and keep moist. I have a fabulous book on container veg growing somewhere in a box at the back of the storage garage in the UK …

Tuesday, I decided to work on the small ruin next to the house to use as a chicken enclosure. I spent the entire morning trying to construct a dog-proof gate from bits of old wood, a door and chicken wire. All I succeeded in doing is discovering I’m not at all practical when it comes to carpentry! Thank goodness I didn’t attempt to make a chicken coop. I would love to have a few chickens though, so I’ll need to give that some more thought another time.

My kind-to-an-extreme neighbour Fernando, who lives in Lisbon but has a house in Coelhosa, left at the weekend*, and I’ve been enjoying the peace and quiet! I really love the solitude, but I’ve tried very hard not to become a total hermit, as I don’t think that would be good for me, ultimately. I’ve visited my other neighbour Fernanda a couple of times – she speaks no English, I speak only a little Portuguese, so we just smile and laugh at each other – and I had coffee with a friend in Pedrogao after the market. Andrea and family invited me to a barbecue at a beautiful praia fluvial (river beach) at the weekend and we also all went out for a meal at a restaurant on Thursday. It was my first experience of restaurant-standard arroz de pato – duck rice – and it was amazing, probably the tastiest thing I’ve eaten in my seven months here in Portugal. 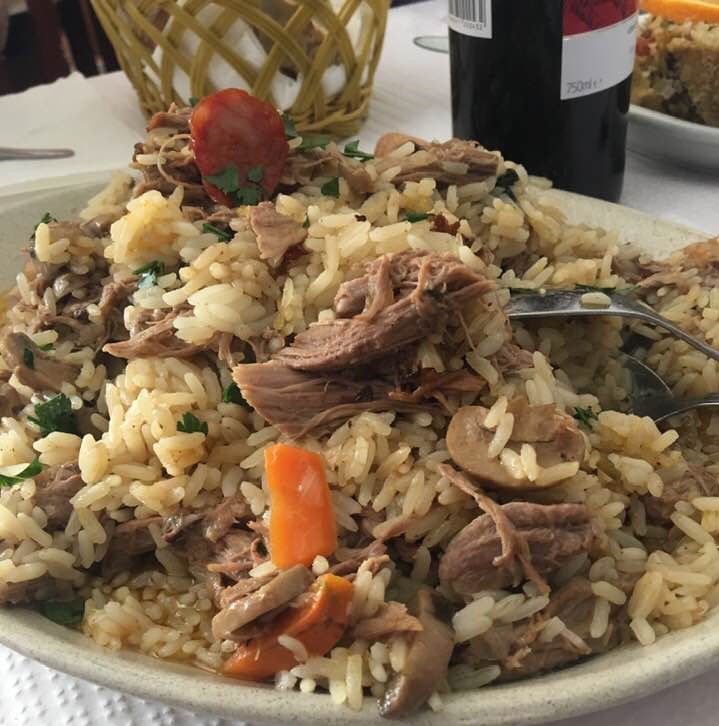 (*I spoke too soon! The day I wrote this post – and before I had a chance to post it – I had a lovely afternoon out at a praia fluvial, and returned shortly after 8pm to discover Fernando was back. It didn’t take long before he appeared on my doorstep with an armful of apples, some crackers, a bottle of water and a saucepan of stewed apples! I’ve also been given yet more apples and some potatoes by another couple who own a house here and appear now and then to harvest their land. If only I had a freezer… )

But mostly, I’ve just taken the time to observe the beautiful world I live in.  There’s something truly wonderful about being able to find time to enjoy nature – listening to the birds, following the progression of a family of giant ants, watching the butterflies, tasting fruit picked straight from the trees, listening to the wind in the branches, tracing the shadows of the clouds moving across the mountains, revelling in the changing light at dusk. And of course, enjoying the antics of Pickle and Bobcat, who are well on the way to becoming friends! 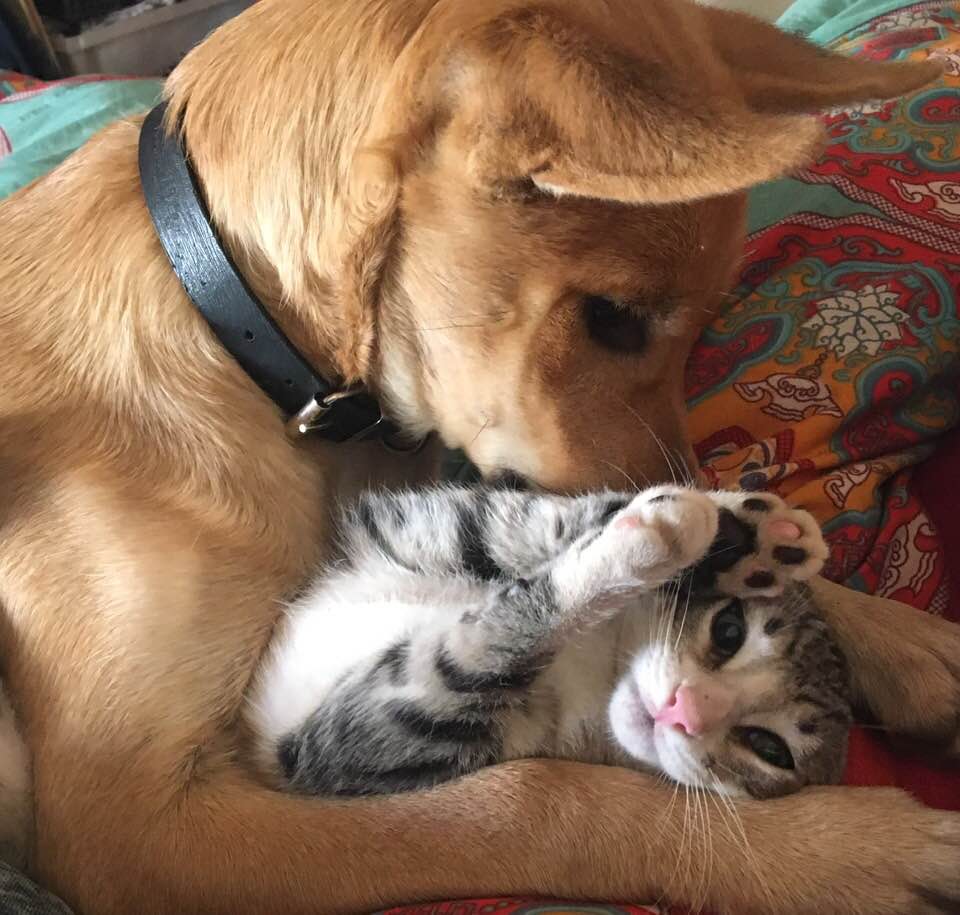 One thought on “A Simple Life”