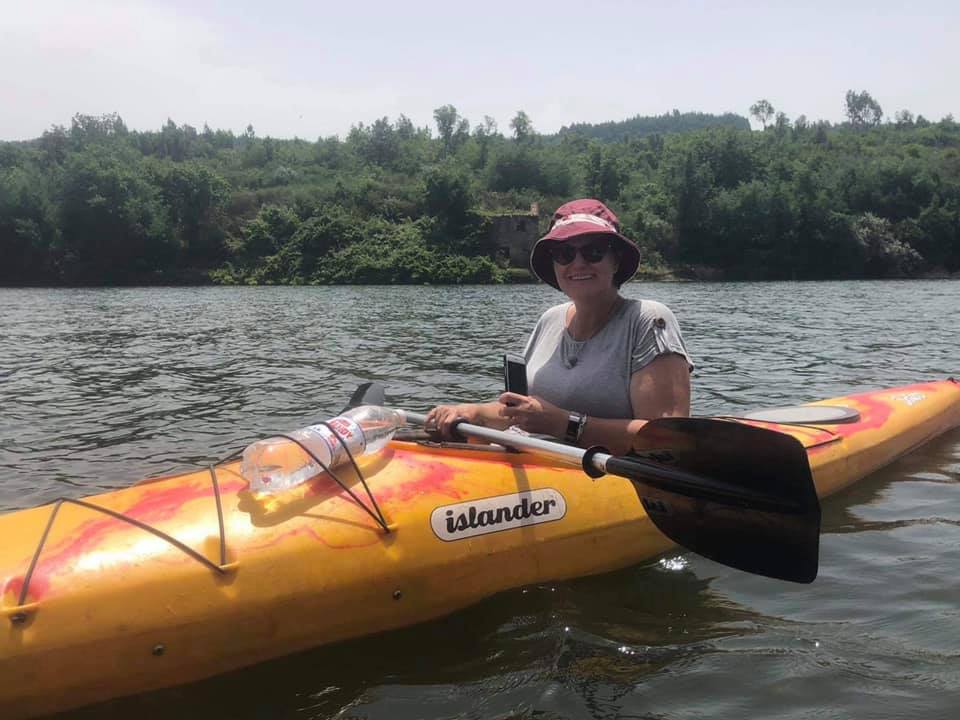 I really must start doing better at this blogging lark …. after all the excitement of moving to Portugal and blogging about this new life a few times a month, it’s a pretty poor show to have only managed four posts in the whole of 2021 – and the last of those was over six months ago!

I could cheat and say it’s because there’s not really been anything going on and in one way that’s true – I don’t think life will ever get back to what we once knew as normal – but at the same time, as Covid restrictions eased last summer, I did get out and about and managed to get quite a few things done, including some from my 101 things in 1001 days list.

So I thought it was time to do a bit of a round up of 2021 and set out a few of my aims for 2022 …one of which isn’t to write here more regularly, but probably should be! So here is the first of a few posts to bring us up to date.

There were two key things going on in July – messing about on the river, and writing a book!

Kayaking on the Mondego

I managed to cross two water-based activities off my 101 things list this month. First I joined a group of people for a kayaking trip down the Mondego. We were taken to a launch place upstream from the big bridge over the river near Tabua and, after some instruction, we set off at our own pace. Over the next three or four hours we kayaked 13km of the Mondego to a spot close to the bridge leading to Carregal. THIRTEEN KILOMETRES! Yep, I was pretty proud of myself for managing that! The weather was quite overcast, which was a shame in one way, but then again it meant it was relatively cool and I appreciated that during the last stretch, when my shoulders were really starting to feel the strain. We stopped for lunch at a spot near Parada, where there is a small chapel that is submerged in the river – I’ve tried but failed to find out why, but it could be to do with the building of dams that resulted in flooding/widening of the river; a new chapel has been built further inland. At certain times when the river level is low (it’s controlled by the dams rather than the weather) it’s possible to kayak right through the chapel, which is exactly what I did!

Thanks to Matt at Rock and River for the experience, which I would definitely like to do again.

Paddleboarding on the Alva

A couple of weeks later I was back on the water, this time trying and failing to stand up on a paddle board! This was on the Rio Alva, and a group of us, some experienced and some complete beginners (me!) met near the beautiful Peneda Talhada river beach. After some brief instruction and safety advice we set off up the river, covering around 1km to a dam before taking a short rest and travelling back again. I tried early on to stand on the board, but being (a) deaf in one ear, (b) left handed and (c) clumsy, I have very poor balance and as soon as I got to my feet I was off the edge and into the water! It then took ages to haul myself back onto the board and I did the rest of the trip upstream on my knees, before switching to an undignified but more comfortable seated position for the return journey. I tried to stand on the board again when we arrived back at the river beach, but once again I lost my balance and this time flipped off the back of the board!

I’m quite annoyed that I didn’t manage to stand up (although I wasn’t the only one) and I did enjoy the experience. I’d like to try again some time, but I think I preferred kayaking.

Thanks to Sabine at SUP Ria Alva!

My book: What’s Your Story?”

The other thing that took up most of my leisure time in July was writing my second non-fiction book. I’d been meaning to write a book about writing books – as a tool to support my Proof Fairy business – for ages. I’d even gone as far as planning it out back in January 2020 but had lost the plan and used that as an excuse not to progress with the project. But then in June I found it, and decided to set aside time every weekday morning in July to get the book written. And write it I did! By the end of the month I’d bashed out around 50,000 words and then spent the next three months editing it, getting feedback on it, rewriting it, editing it some and formatting it. The book “What’s Your Story? Take your non-fiction book from possibility to plan to publication… and beyond!” came out in November and you can buy it on Amazon. I’m really proud of it!

I’ve been continuing with weekly Portuguese classes throughout the year and do my best to speak Portuguese whenever I can, but it’s a struggle. However, I had a funny moment when some of the old ladies in the village decided they wanted me to teach them English! The three of them – Dona Elvira, Dona Laura and Dona Mathilde – were sitting on a step, giggling like naughty schoolgirls. “Aqui, aqui!” Dona Elvira called to me (“Come here.”). So over I went. “Como se diz… em ingles?” (How do you say… in English?”) and she pointed at Dona Laura, who was doing the world-famous hand gesture for sex. Well, of course I was very embarrassed. “Sex,” I whispered, blushing ferociously. They all stated laughing and then Dona Elvira said, “Nao, uma palavra mal!” (“No, a bad word!”) Well, I was shocked…!!!!!

August was very hot – it got close to 40C a couple of days – and I had loads of work to do, which was annoying, as I would have loved to be out working on my tan! It was too warm to walk the dogs until the evening most days, but on several afternoons we drove down to the river, to a secluded spot at an abandoned river beach. We’d walk through some woodland in the relative coolness and then I’d take a swim in the river, which was warm as bathwater but still very refreshing on those hot sticky days.

Weekends throughout the summer I tried to get out and about and socialise a bit – coffee with friends, meals out and trips to markets. There is a lovely artisan craft and food market near Penela, which is an hour or so drive west, but has some lovely products and delicious food, so I’ve been there a few times. I also regularly go a market in Coja, which is about 40 mins from here. A friend described it as “once a month all the hippies come down from the mountains and sell the stuff they’ve been making”, and that’s very much what it is. There’s a mix of (mostly vegan) food, handmade crafts and bric-a-brac, and I usually come home with a few bits and bobs. There’s a good atmosphere but generally not much adherence to Covid regulations (no masks!) and I have felt a little wary there on occasion. However, not as wary as I felt at another market closer to home which was 100% hippy, very small and felt very unsafe in terms of social distancing. I gave it a go, but I don’t think I’ll be going to that one again.

I crossed another thing off the 101 things list in August when I went south of the river to see a visiting tattoo artist, who did me an incredible heart/compass tattoo on my back, and a tiny semi colon heart on my wrist. It was something I’d been thinking about for ages AND an impulsive decision, if that makes any sense… but I am very pleased with the result, anyway.

The highlight of August, however, was when I went to see a band …. yes, LIVE MUSIC!!!! The local council held a few evening events in a park and I went along to see a band called Kotazasolta, who were a covers band, the kind of thing you might get in a pub back in the UK. They sang in a mixture of English and Portuguese, and covered a wide range of genres – we had some folk, some rock, some pop. But to be honest it didn’t matter what they were playing; the fact was it was live music, the first I’d seen in two years, and I found it really quite emotional and actually shed a tear or two! Thank goodness I was wearing a mask (as everyone had to) because I had the biggest Cheshire cat grin on my face!