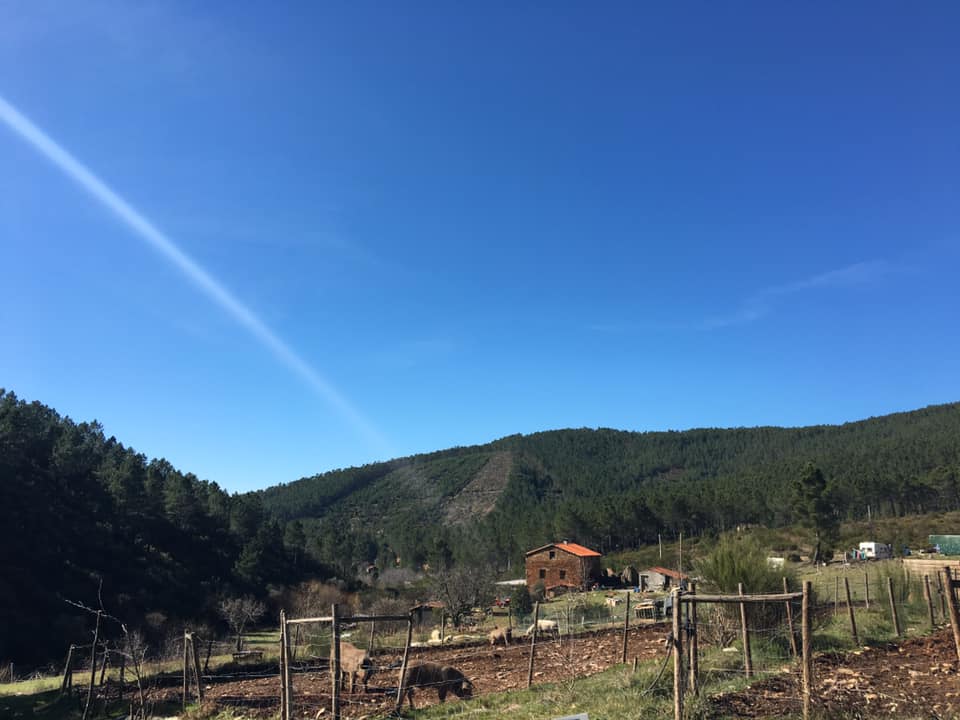 Can you believe I’ve been in Portugal for a whole week already? The time has flown. At the moment I think I’m mostly in holiday mode though I have been making a big effort to throw myself into life on the farm – and I’ve really enjoyed it. In fact, while I was on a terrace pulling bracken and grass for animal bedding, I had a sudden clear vision of me in my own little place here, with a few goats and chickens, a veg patch, just living a simple life. Obviously it’s early days and the holiday mood may wear off but at the moment I feel wonderfully content and relaxed and free.

The weather has been lovely, on the whole. As I said, it is very cold first thing in the morning – we’ve had a few hard frosts – but once the sun comes over the mountains at about 10am it warms up beautifully, with clear blue skies and sunshine. I generally start off in three or four layers of clothing but by early afternoon I’m down to a t-shirt. However, the air here is still cold – we are about 2500 feet above sea level – and as soon as the sun drops it becomes chilly again. Usually when I walk to my caravan at bedtime there’s already a sheen of dew on the grass. 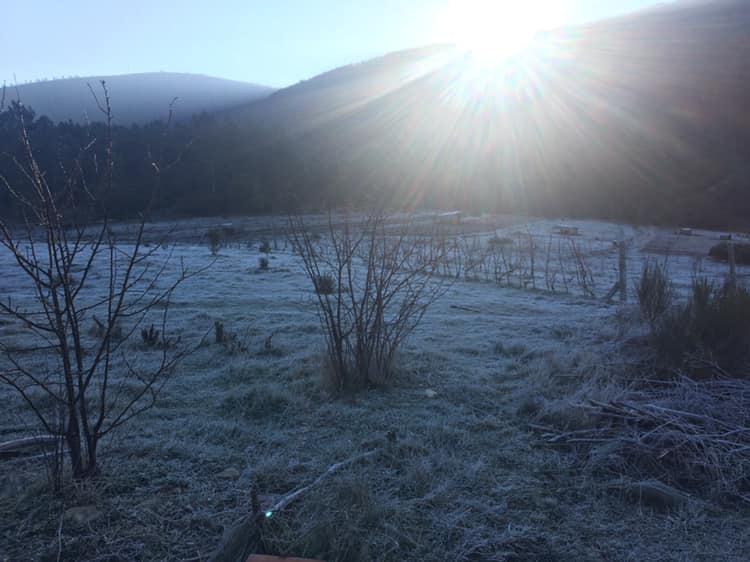 The two big worries I had about being here were driving, and sleeping in a caravan in winter. And of course neither has proved to be such an issue after all. Apart from a couple of occasions when I’ve attempted to turn the wrong way onto the road, driving on the wrong side feels surprisingly natural (and the lack of other cars helps too!). On Monday I had an early morning drive to Pedrogao Grande (the family car needed to go to a garage and they needed a lift back). It’s about 40 miles and my sat nav was showing a crazily convoluted route that would take three times as long to do, so I went with Google Maps at hand and some vague directions – and made it there. The scenery was stunning – the clouds hung low in the valleys and the sun streamed over the mountains. One morning I will go out early with my camera and do a photo trek.

As for the caravan, it’s surprisingly cosy. One of the goals I set myself last week was to make it feel like home and I think I’ve succeeded in doing that.  Admittedly it’s perishingly cold at night and even colder first thing in the morning – the caravan has no power so I’m reliant on two duvets, two blankets, two layers of clothing, socks, slippers, a scarf and a hat! But, armed with Lazy Boy tea, a hot water bottle and hand warmers, I snuggle up with my iPad, watch an episode or two of Grace and Frankie and am soon warm and cosy – so warm that it’s difficult to get out of bed the next morning, especially when I can see my breath mist in front of me! But I wake up and see lots of familiar things – family photos, favourite pictures, cushions, books, my “Fab Five” – Stone Cold Steve Austin, The Undertaker, Felix from Orphan Black, a sunflower and a flying monkey – and feel like I am home. 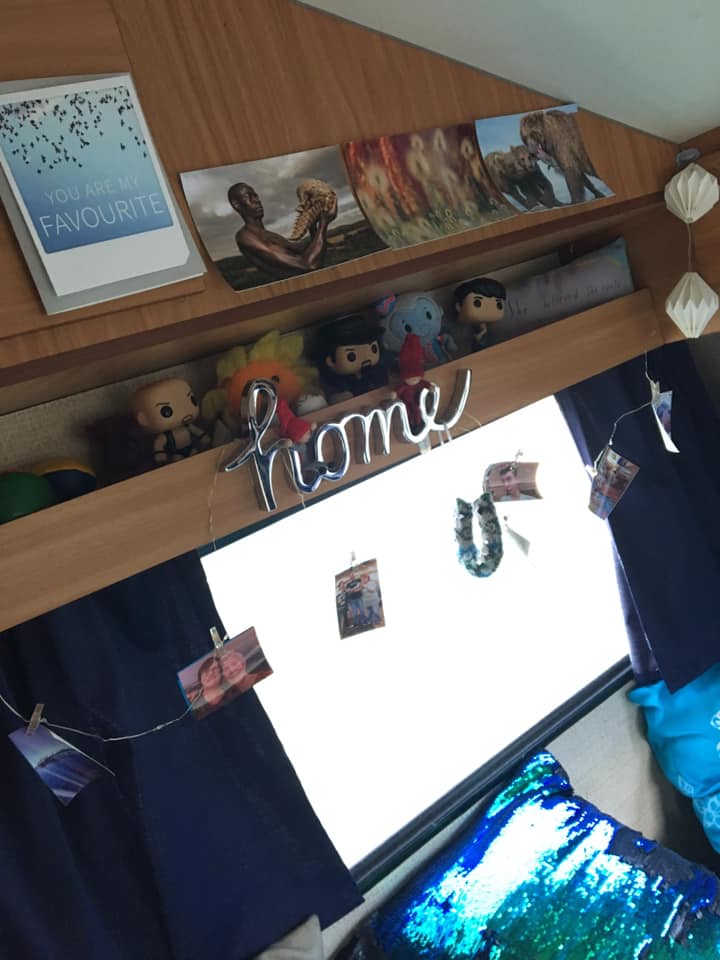 One of my jobs is doing the washing up. The sink is outside and has cold water only – but actually, when the sun is out, I put some music on my phone and have a sing song while I wash the dishes and pots, and it can be quite an enjoyable activity. However, on Sunday it was wet all day long – what my host called “fools’ rain” as it didn’t look like it was doing a lot but got you soaked very quickly. We were in need of plates so I went out to do the dishes in the rain, which wasn’t such fun!

I’m really enjoying farm work and getting to know the animals and the tasks involved in keeping them happy and healthy. There’s always plenty to do – especially feeding the beasts, and collecting bedding. There’s a plentiful supply of dried bracken and grass, plus dried leaves, which make perfect bedding for the sheep, goats and pigs.  It involves lots of bending over to gather them in piles, but it’s strangely fulfilling work – especially as you see the piles grow and the land become cleared. I’ve mucked out one of the pigsties and the rabbit shed, which again was tough on the back – but time seems to move at a different pace here, I found I could stop for a breather, have a chat with a chicken, pet the pigs and carry on working, and in no time the job was done. And though I felt like I’d done a good day’s work, it was a happy sort of tired. 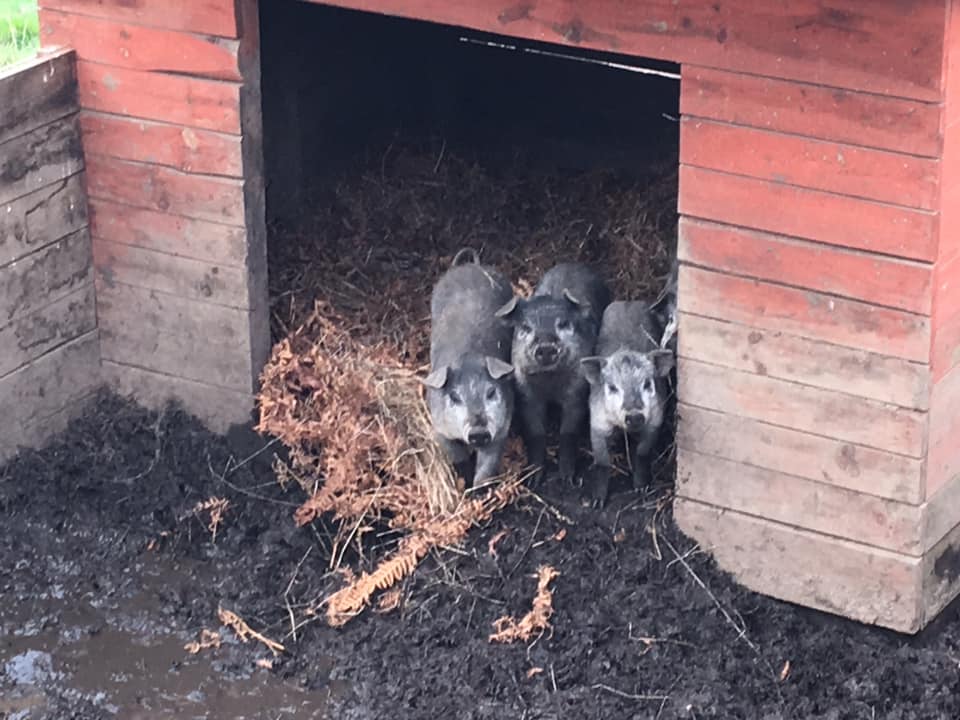 I’ve also taken on responsibility for walking the goats. There are three, and they live in a shed but come out every day for an hour or two to eat anything they find. And that’s the problem – they will eat anything and everything, so I have to be careful where I take them or they will strip the leaves off the olive and medronho trees and kill them. Yesterday the goats were very well behaved – we spent 40 minutes in the meadow where they munched on grass while I read a book, and then I took them up the mountain to eat heather while I used the compost loo! They’re not always so easy to manage though … I’m sure there will be a few goat stories before I’m done here! 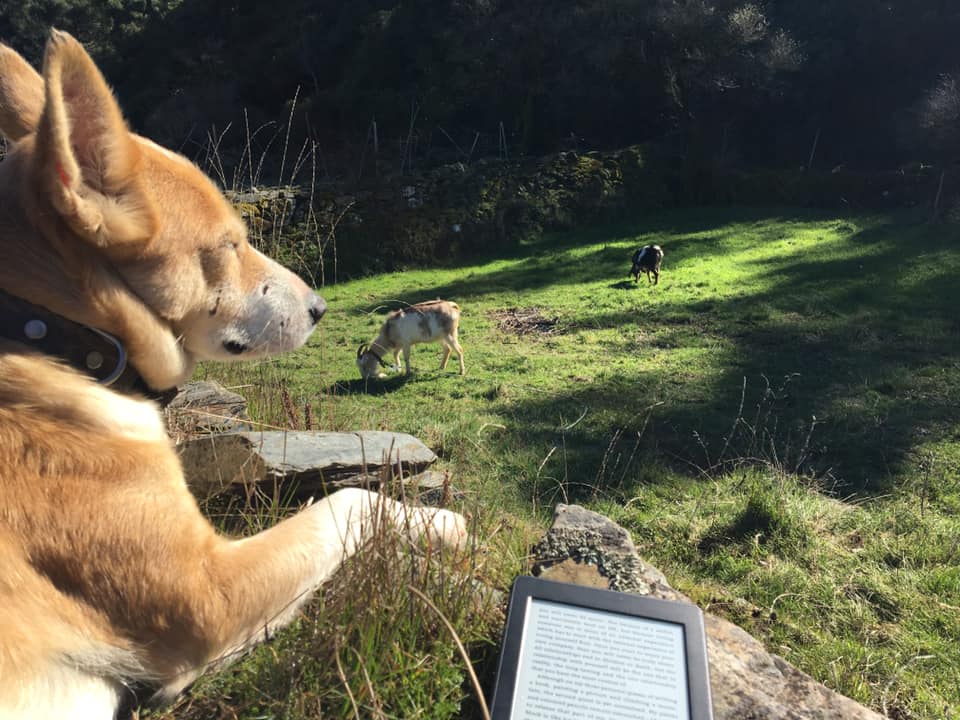 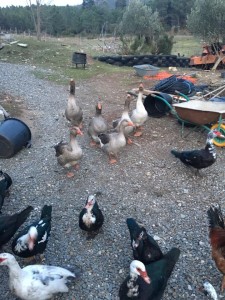 For many years crocodiles were my arch enemy, after a close encounter on the Zambezi river. However, I got over my fear some time ago but have found a new nemesis – GEESE! It seems wherever I am on the farm, the geese are waiting to ambush me. On my first full day Mr Goose bit me hard on the finger at feeding time, and he’s also deliberately come running after me to take a bite out of my leg! They also seem to spend a lot of time hanging around my caravan, and I’ve discovered it’s almost impossible not to walk goose poo into my home. Bastard creatures!

This week I’ve set myself the challenge of falling into some kind of routine. I have some Proof Fairy work to be getting on with – although I need to earn much less here than in the UK, I do still need to earn – but strangely, the appeal of proofreading is less than the appeal of collecting more bracken! Ah well. So I need to knuckle down and create a loose schedule – probably Proof Fairy work in the morning, farm work in the afternoon, and maybe half an hour of DDP Yoga at lunch time. Of course, as the year goes on that will probably change as it gets far too hot here to do much outdoors in the afternoons, but it might work for the time being. I’ll let you know how I’m getting on in my next blog post.

I also need to spend more time on my Portuguese. The local council is running classes for foreigners and I had my first lesson last Thursday, but as I’d only just arrived I didn’t really take a lot in! So far, I’m okay with “Bom dia” and “Ciao” and “Obregada” but that’s about it! My daughter gave me a phrase book got Christmas so I really need to dedicate some time to reading it, and also doing some of the Duolingo lessons on the iPhone app. Determined to learn at least something useful! 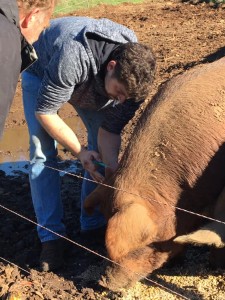 Something not especially useful I learned is that sheep have long tails! I never knew that…

Yesterday the vet came to vaccinate and test three of the pigs for Aujeszky’s, a highly contagious disease that causes lots of issues for breeding pigs, including stillbirths, miscarriages and weak piglets. The vaccination was easy, but getting blood from an 800lb boar’s ear is not the easiest of tasks! The vet did a sterling job and the pigs were very patient – though that could have had something to do with the huge amount of corn we gave them to keep them occupied.

Probably lots more I can write about but I’ve just found out one of the big pigs has had six babies, so I’m going out in the sunshine to investigate!

One thought on “My Portugal Adventure: One Week In”